Having stored the fin, rudder and tail plane, I've started to prepare parts for the wings.
I'm working slightly out of sequence as I'm meant to deal with the spars first but that will mean re-arranging the garage.  The main spars are about 15 feet long as they overlap inside the fuselage, and the rear spars are 11 feet long, so I have to create a temporary painting tent as the spars won't go upstairs to the regular spray shop.

So, first job is to prepare the front stub spar and all of the aft spar hinge brackets for the flaperons. 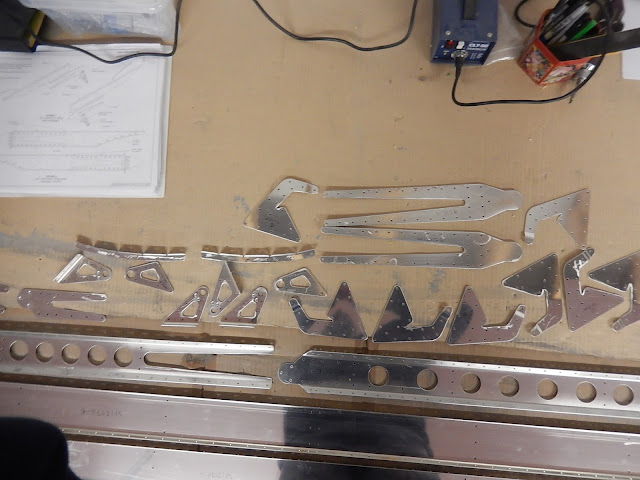 Here are the hinge parts and also the front stub spar and aft spar  fittings that engage into the fuselage. 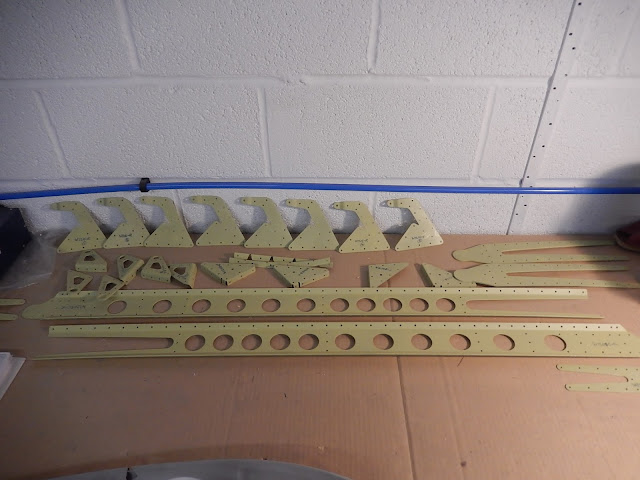 Now all the parts primed and ready to start riveting parts together. 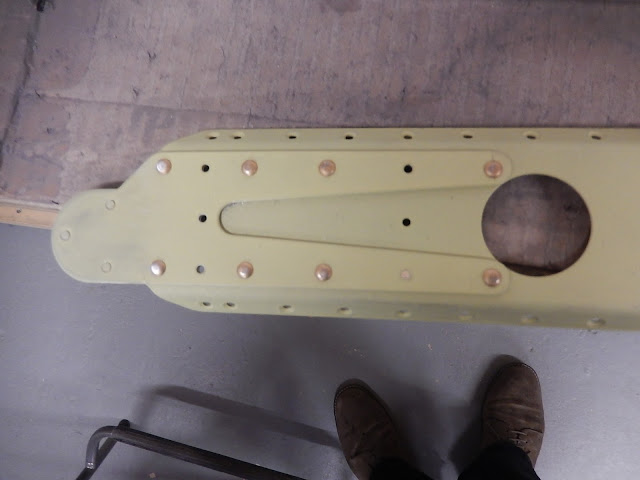 End of the front stub spar with the doubler riveted in place.  Note the three countersink rivets in the fuselage tongue  - these are flush-riveted on both sides which was a pain as the specified rivets were slightly too long.  The empty holes in the face of the stub spar are where the front of the wing ribs will be attached.  The countersunk holes in the flanges are for the wing skins.  Doing the countersinking was awkward even with a machine countersink cage, as the depth still seemed to vary and I was quite worried about wrecking one of the spars! 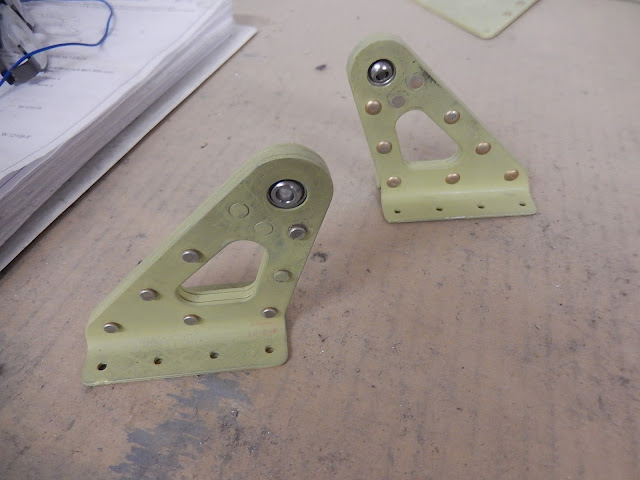 Flaperon hinge brackets complete with bearings.  I wonder how you replace the bearings in service?  Unlike the rudder hinges which are bolted to the airframe,  these hinge brackets are riveted in place to the rear spar.  As with the stub spar, there are double-flush rivets adjacent to the bearing.

The next major items to prepare were the wing ribs.  Well over 30 hours spread over a couple of weeks sitting at the bench, cutting, filing, deburring, fluting and scuffing over 50 ribs prior to painting!    I have many cuts and grazes from sharp metal, plus raw fingers now from the scuffing with purple ScotchBright.
There are two types of forward rib supplied, but after trimming tabs, flanges or both, you end with 6 different versions.  Same with the aft ribs as well - 2 standard types but you end up taking the aft flange of all right versions and have two differing left versions.  I guess it simplifies manufacturing for Vans but I think it's going to be pretty confusing when it comes to final assembly! 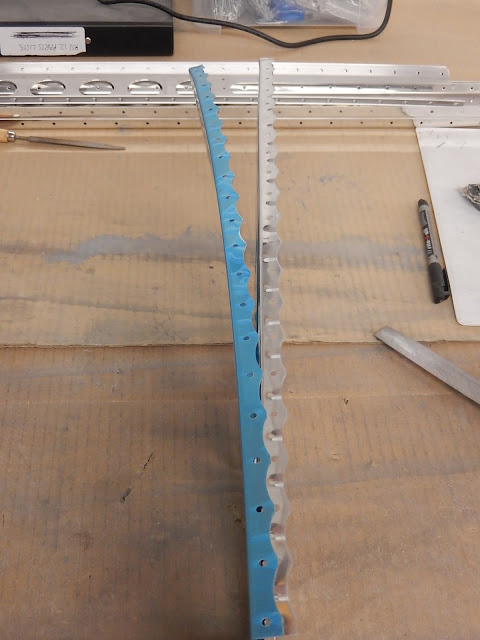 A forward rib before and after fluting.  The curve is an unfortunate by-product of the manufacturing process when the edge flange is produced.  On the right side you can see the dimples between each hole which pulls the metal straight.  These are all done by hand using a special pair of pliers, but only once the deburring is complete (yes, I did one in the wrong order - big mistake!). 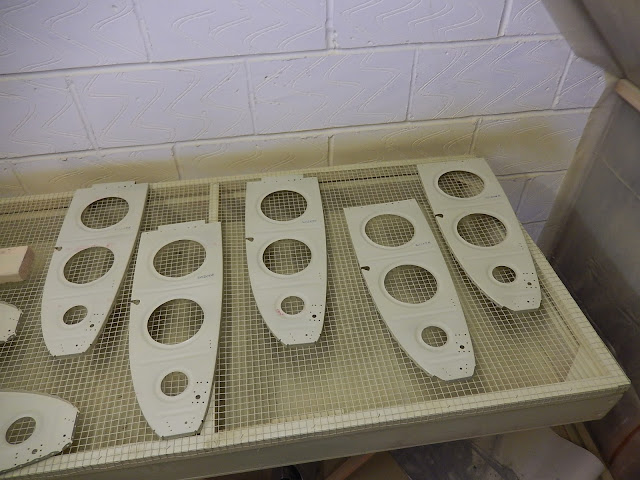 Forward ribs on the painting bench. 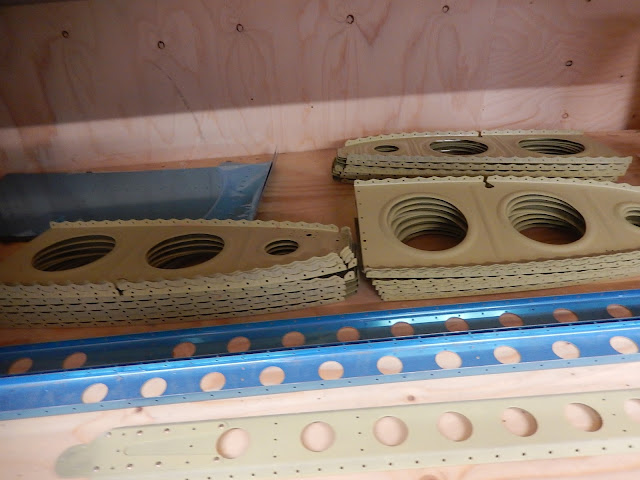 All of the forward ribs complete and stored below the bench ready for wing assembly.  The long pieces still covered in blue plastic are the spars for the flaperons. 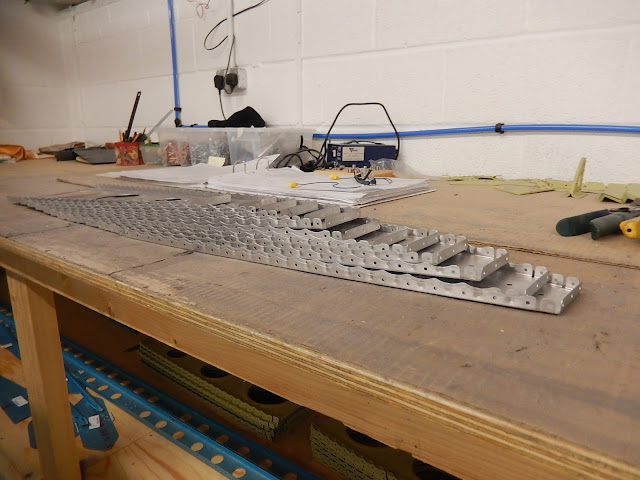 The final 13 aft ribs ready to be painted.  There's more than full day's work preparing these.

Over the next week I have to paint the remaining aft ribs and create the temporary paint tent so I can paint the main and aft spars.  I also have to paint the top of the rear fuselage below the fin  - unfortunately overlooked during that stage,  before I can finally store the tail cone assembly.  After that, I'll have the space to pull the bench out from the wall and start wing assembly.  Exciting times ahead!
Posted by Harry'sRV at 10:48