Since returning from holiday I've continued making good progress on the main fuselage structure, with probably the most concerted period of activity in the last 12 months. 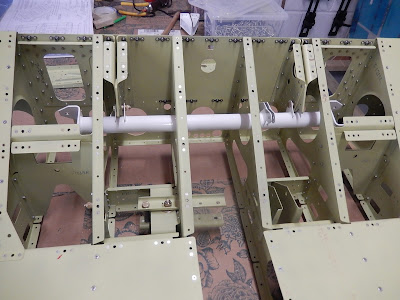 Control tube installed onto the 2 bearing supports.  The deliberate mistake in this picture is that both bolts should have the heads outboard and the one on the right is facing the wrong way.  I corrected this before moving on!  Once the aircraft skin is fitted, it won't be possible to get this tube out again.  Also if a bearing in the support bracket needs changing, the whole bearing bracket will need to be drilled off and removed from the aircraft - a bit of a dockyard job!
a 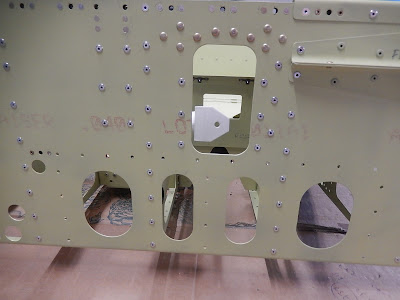 Looking rearwards through the hole in the seat front bulkhead (below the pilot's knees) where the pilot's control stick will fit onto the control tube. 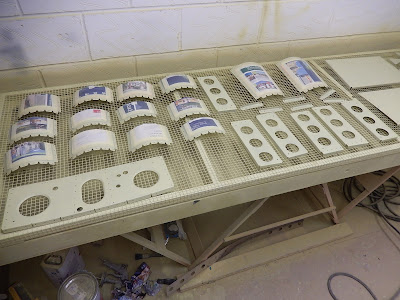 Lots of parts preparation for the lower fuselage side skins and the fuselage step floor. 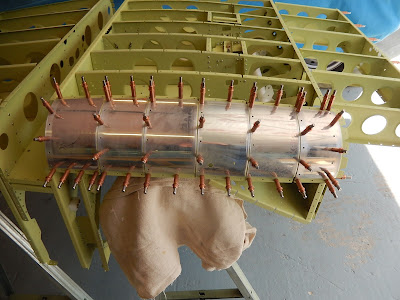 The fuselage structure upside-down and showing the left-hand lower side skins.  Lot's of individual overlapping sections are used to take up the complex curve.  It's a bit like an Armadillo's armour!  On the right you can see the step floor ribs. 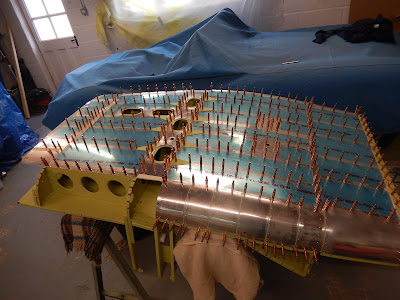 With both lower side skin sections in place, it's time to fit the main belly skin.  This is probably the largest individual skin in the kit.   I didn't count but I think there must be about 500 rivets holding this on and it took several hours and aching hands putting in and removing cleco pins! 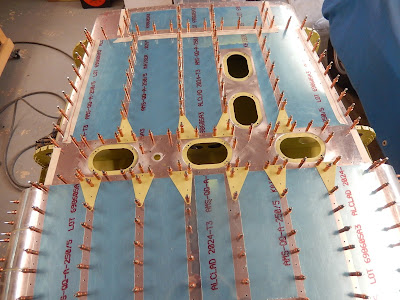 Looking down on the belly skin (top of the picture is to the rear of the aircraft) showing the access panels for fitting the main undercarriage, rigging controls etc.  The yellow triangular plates are additional doublers to help spread the load between the skin, floor ribs and centre section bulkheads.  The blue plastic was removed and the skin painted underneath the doublers before they were finally riveted in place.  Left of centre you can see a large round hole - this is for the VHF antenna connector. 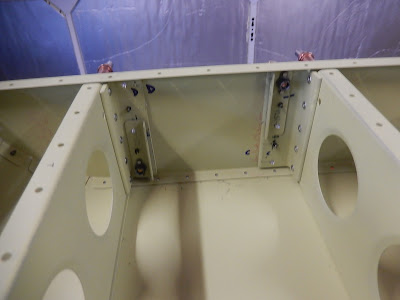 With the belly skin installed, the fuselage is turned the right way up and work commences on the step floor bulkhead and the step reinforcing angles.  Here the step anchor nuts and mounting angles are being installed. 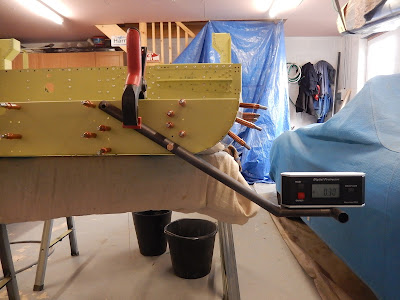 The steps need to be leveled before drilling the final hole for the top mounting bolt.  Here I've checked the fuselage is level on the trestles and then set the step as close the level as I can manage - 0.3 degrees.  I can't get it dead-on as the top of the step arm would stick above the bulkhead but it's close enough for me.
If you've noticed, the steps are in front of the seats, meaning you access the cockpit by climbing onto the wing from the front - directly behind the propeller, so not something to do with the engine running! 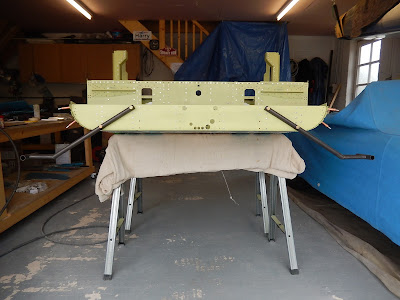 Both steps fully installed.  They now come off for painting and to make continued building easier, and won't get fitted for good until we have the aircraft in the hangar at the airfield for finally assembly prior to flight.  My kit was delivered with the original step design, which has subsequently been updated to improve resistance to cracking at some welds (possibly due to heavier pilots than I).  The change to the step design doesn't affect the mounting points (although the bolts are different lengths which briefly confused me as I'm working to the latest drawings which call out shorter bolts and they weren't long enough!).  I'm going to stick with the steps I've got initially and just keep a good eye on them. 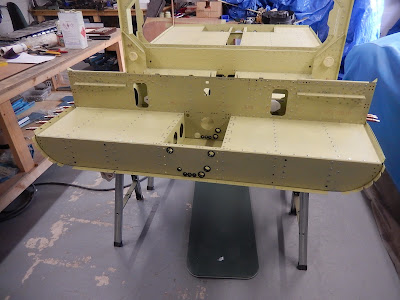 With the step structures completed, the step floor panels can be fitted.  Daughter's boyfriend James got involved here, final-reaming #30 all of the holes and pulling the rivets. With the floor down, the nylon bushes which protect wiring, control cables and pipework from chafing on the metal structure are installed into the bulkheads.  In this view you can also see the pilot's and co-pilot's control stick connections to the control tube. 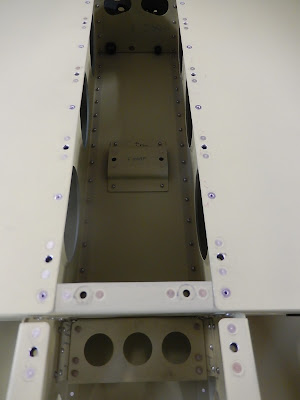 Another small bracket to install at this stage - the electric fuel-pump mount, which is in the centre tunnel below the baggage bay floor.  There's also a mechanical pump on the Rotax engine. 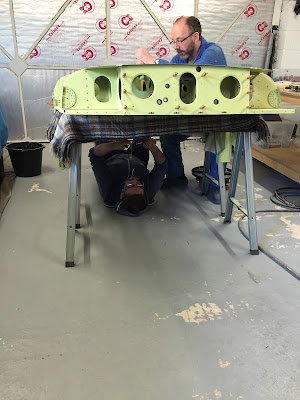 I needed some help to fit the six studs into the cockpit centre tunnel.  These will be used to mount nylon blocks which secure the fuel and brake pipes.  James drew the short straw and is fitting the nuts to the studs above his head whilst yours truly holds the screwdriver!

I've started preparing all of the parts for the remaining forward lower fuselage section (the floor below the rudder pedals) and the engine firewall, so hopefully I'll have this section completed and ready for a stage inspection in the coming week.