Following the recent stage inspection of the lower centre fuselage (thankfully no problems as things are starting to become difficult to access), it was time to carry on and make the cockpit look more aircraft-like.   I'd prepared plenty of parts whilst awaiting Jerry's inspection visit so was able to press on pretty quickly. 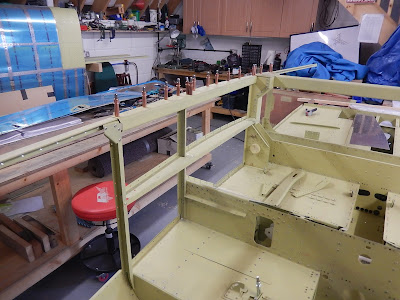 First job was to assemble the fuselage side structures-  the uprights and armrest and then add the longerons.  This view from inside on the right looking rearwards 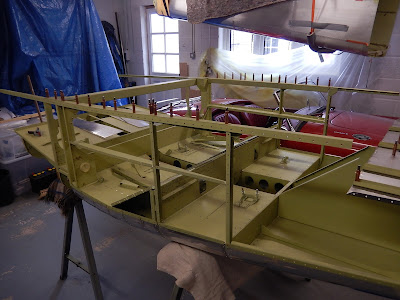 A view from the right side - forwards is to the right of the picture.  You may notice that the fuselage brace behind the seats is also fitted. 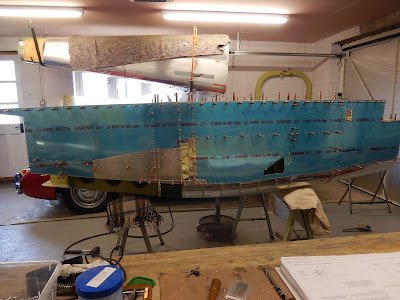 Now the side skins are cleco'd in place so the matching holes in the longerons can be drilled. 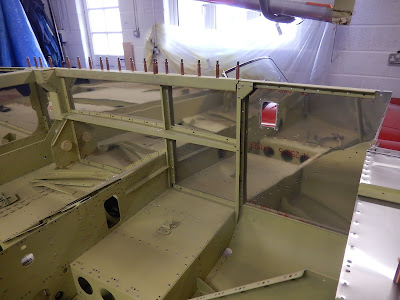 An inside view of the left fuselage skin temporarily in place 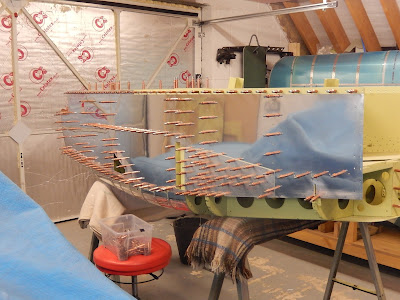 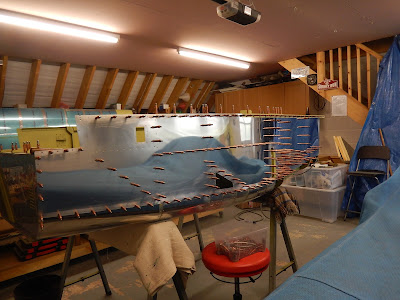 Now the skins have been primed and are ready to be riveted permanently.  This job also includes some additional strengthening pieces at the wing-root to spread undercarriage loads. This was a later change to the kit design following in-service experience, so some builders have had to do this modification on completed aircraft. 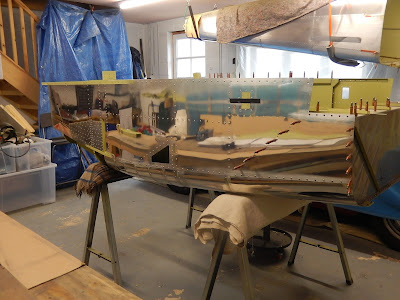 The right side completed - you can see the additional doubler with loads of extra rivets! 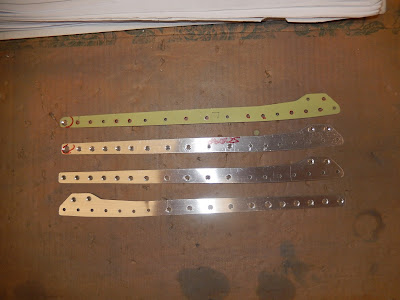 Of course something had to go wrong!  I had to remake some of the doubler parts as countersinking didn't go to plan.  I still can't figure out how a countersink can go too deep when using a caged cutter with a depth stop and also have the same problem on both sides of the aircraft! 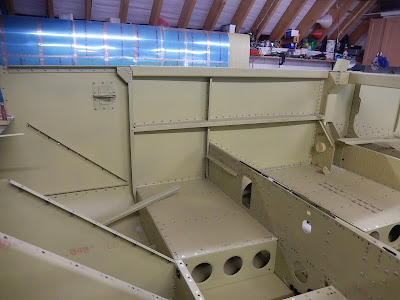 Inside the right side with the skin completed.  You can also see the passenger air vent. 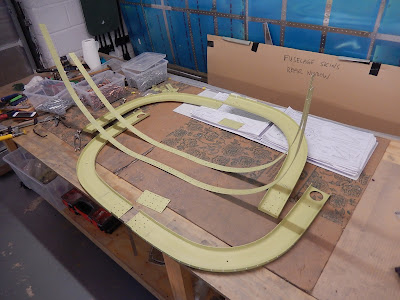 Next job is fabrication of the cabin roll bar which also supports the canopy.  Above are the constituent parts - 4 pressings and two inner straps plus two jointing plates.  The straps need to be rolled to the approximate radius of the roll bar and this was easily achieved using a rubber printing roller. 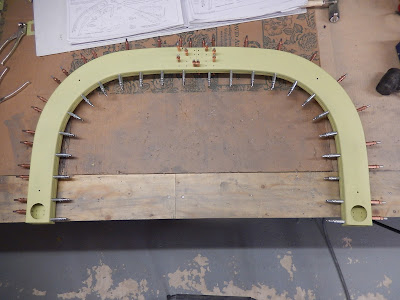 The parts are all assembled using the 3/32 guide holes and then match-drilled to No. 30. 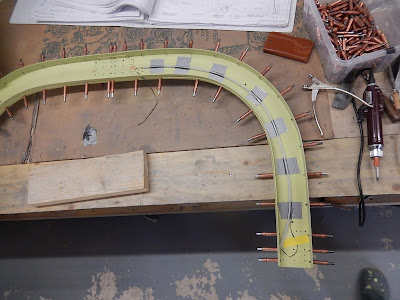 Before assembling, I decided to jump ahead and install the conduit for the wiring to the canopy latch switch and cockpit dome light. 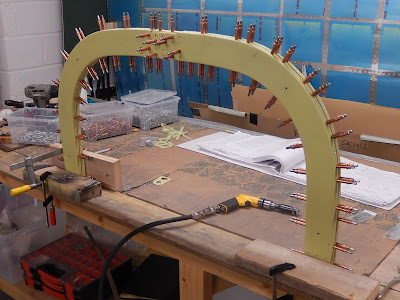 The whole assembly cleco'd and ready for riveting. 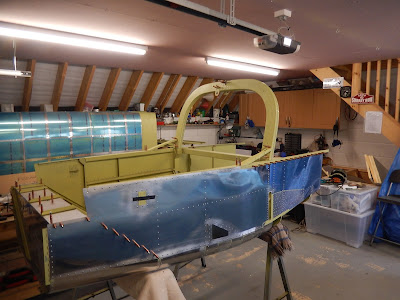 Next the roll bar is fitted to the two machined blocks that have previously been bolted to the fuselage cross-brace.  No picture of that unfortunately but you can see one of the bolt-heads and a bit of the machined block below. 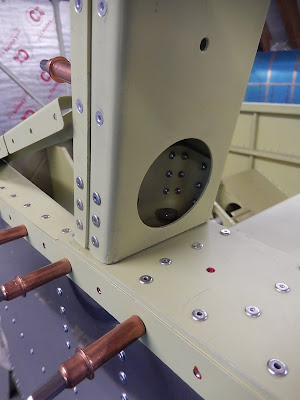 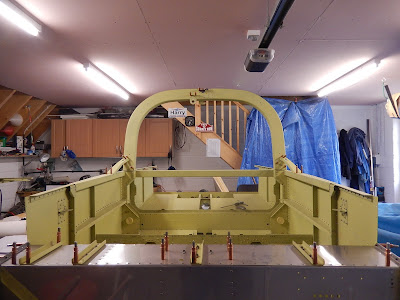 Looking rearwards showing the roll bar and fuselage and cross-brace against which the seat-backs will rest. 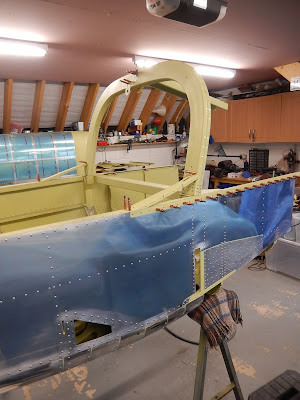 Next task is to install the aft roll-bar support.  In this picture you can also see the triangular hole in the fuselage - this is where the wing electrical disconnect will be installed. 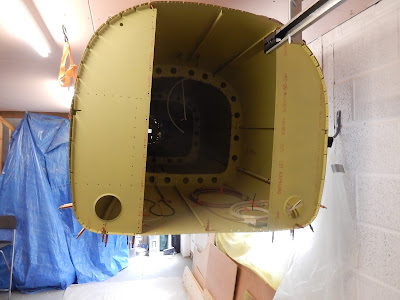 A bit of work now on the aft fuselage - this was completed 18 months ago and hangs from the ceiling above my MG.  It's necessary to match two holes from the aft cabin bulkheads into a pair of shear brackets attached the the lower skin J-sections. 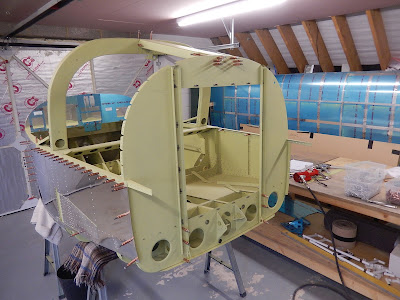 After matching the bulkhead holes to the aft fuselage, I could progress with assembling the baggage bay.   There are vertical channels with anchor nuts for the bulkhead closure panel, and two stiffeners on the right side for the fuel tank attachment . 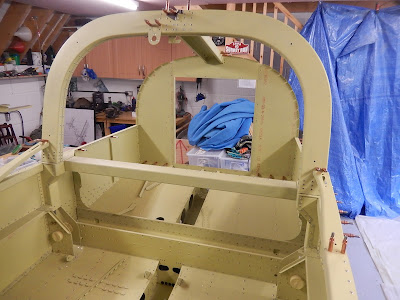 Looking aft at the rear bulkhead.  A large corrugated panel will close off the access to the rear fuselage on final assembly. 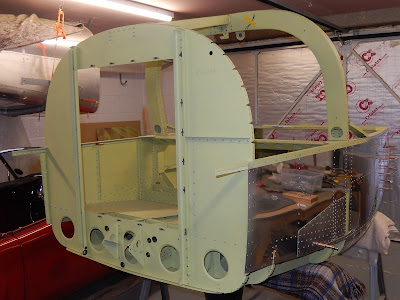 Looking forward from the right rear of the bulkhead.  This is now ready to attach the tail cone and make a complete fuselage!    However, with the fuselage in one piece it will make access very difficult for installing systems  and unwieldy to move, so I'm going to go out-of-sequence for a while and will deal with installing brake and fuel lines and some of the wiring. Before that however, I need to paint the interior.

I thought it might be useful to also get the upper firewall fitted before painting so have been working on that together with avionics cover. 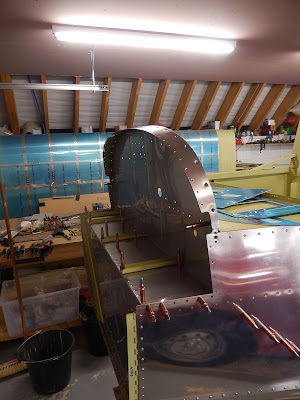 Final job for this section was to start on the rudder pedals and brake cylinders.   I'm deviating from the plans by installing a parking brake valve and using pre-fabricated braided hoses - they arrived today after a tortuous bit of transit by FedEx! 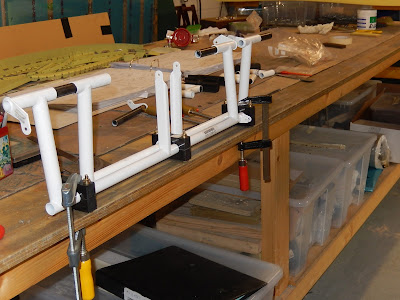 Rudder pedals temporarily assembled and clamped to the bench ready for drilling the brake levers. 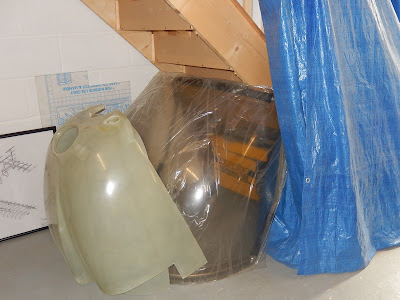 Some parts that have been hidden for almost 2 years have finally come out - the canopy and engine cowlings.  I'm expecting the engine to be delivered very soon so needed to get rid of the canopy shipping crate.  This also gives me room to join the cockpit and rear fuselage together which will hopefully take place in the next 2 months.  I wouldn't say I'm even close to finishing, but there's certainly light at the end of the tunnel!.