We've been away on holiday and I managed to crack a couple of ribs in my back falling off some steps whilst gardening, but nevertheless good progress made since my last blog entry.  More wiring completed, flying controls almost finished and significantly, the two halves of the fuselage have been joined together! 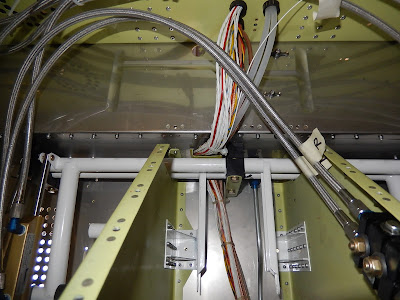 I've finished routing the fuselage wiring loom and pitot-static pipes to the instrument panel. This is looking forwards/upwards in the centre console.  They go behind and over the rudder pedal assembly which is really awkward, as is installing the small cable guide to the left of the central rudder bar pivot.  Anyway it's all in and ready for terminating at the panel. 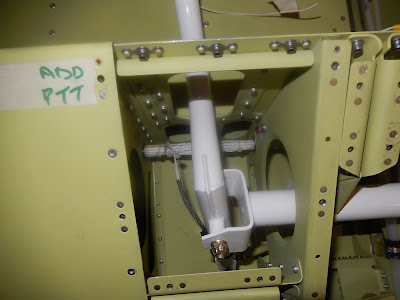 I've also installed the control sticks and associated flaperon push-rods (just visible below the white horizontal tube) and the rudder and elevator cables.  I mis-rigged the control stick push-rods initially (mis-read 9 5/16" on my steel rule and set the distance as 9 5/32" instead) which meant the control sticks weren't parallel with the controls in a neutral position. Therefore  I had to strip the sticks and push-rods out and do it again - a real pain as there are spacing washers needed which I ended up super-gluing in place.
The transmit switch wiring is now in.  Not visible are the cycle handlebar grips at the top of the control sticks which also contain the Press-to-transmit (PTT) switches.  Now I can remove the reminder label! 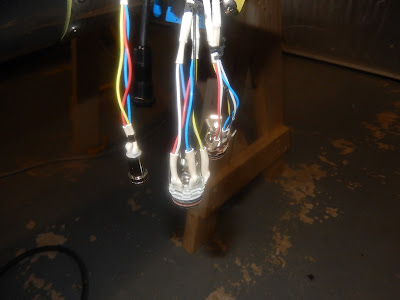 I've completed all of the headset wiring - this picture just shows the co-pilot's sockets including a stereo jack.  Deborah (SWMBO) doesn't find flying very rewarding, so she can independently listen to an iBook or music whist I manage the radio and get us to somewhere of interest!  It does mean I have to have a separate PS Engineering PM3000)  intercom system which is another deviation from the Vans plans.
I've also added supplementary BOSE headset connectors which allow the use of aircraft-powered ANR headsets instead of using battery packs.  All of this took well over a day to do both seats, whereas using the Van's harness, it could probably have been done in a couple of hours!  Nevertheless I don't have any of the awkward miniature Molex plugs that Vans use and I have additional capabilities. 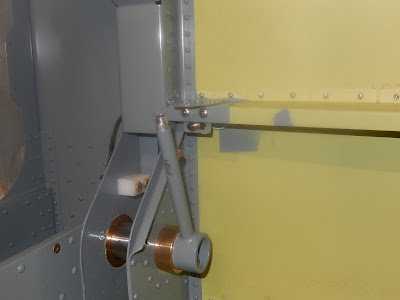 The last bit of fuselage wiring so far was to terminate the spar pin switches.  These switches are there to warn the pilot if the wing-spar pins aren't secure and prevent the engine being started. My kit came with magnetic reed switches which are meant to be awkward to adjust. Subsequently Vans came out with an upgrade for use with miniature push-button switches (mounted just below the 2 shiny screws) so I've gone with the later system. 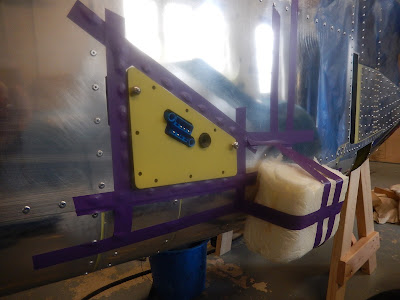 This shows the left wing disconnect panel complete with AOA pipe.  I've temporarily fitted the plate so I can mask around the outside ready to prime the skin beneath.  The piece of foam taped to the skin is protecting the Garmin outside-air-temperature probe which can easily be damaged but needs to be fitted now as this can only be accessed through the wing break cover plate.

Now it's finally time to do some serious structural work and join the front and rear sections of the fuselage together.  With some assistance I got the tail cone down from where it's been hanging from the ceiling for the last 20 months and positioned it onto the rolling trolley. 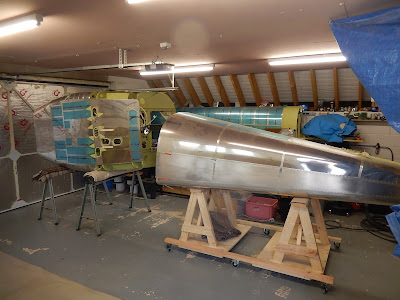 The forward fuselage is still on it's side as I was completing some flying control work.   With the tail cone on the trolley I can move it around single-handed to get the two parts aligned. 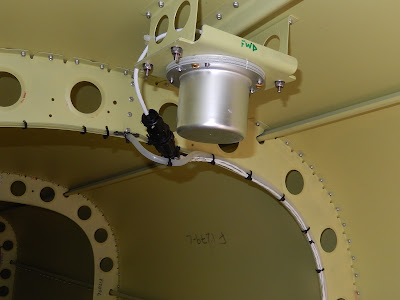 I took the opportunity to install the magnetometer and wiring harness into the tail cone and complete the re-worked static pipe system before the two halves were joined - much easier access than doing it lying down though the fuselage under the roll bar.  I also added a disconnect plug for all of the tail cone wiring (magnetometer and pitch trim) and also for the nav antenna so I can just plug the two parts together when the mechanical work is complete. 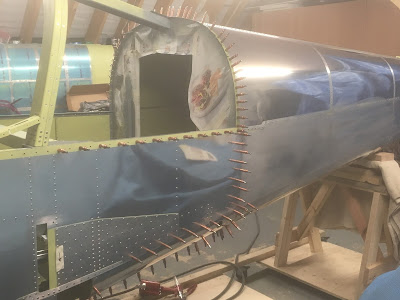 So on to the fuselage assembly.  Here's a view from the left side of the front and rear fuselage sections cleco'd together and ready to rivet.  Not really visible but also in place are the seat belt shoulder strap fittings either side of the roll-bar brace. 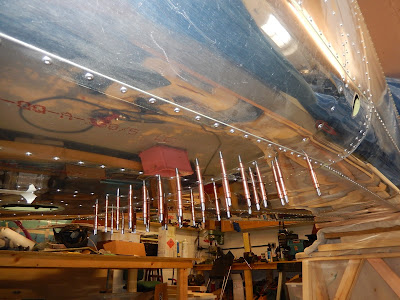 And a view from below.  Setting all of the rivets probably took about a day which includes two lower fuselage panels below the baggage bay which have the exit holes for the flaperon controls. 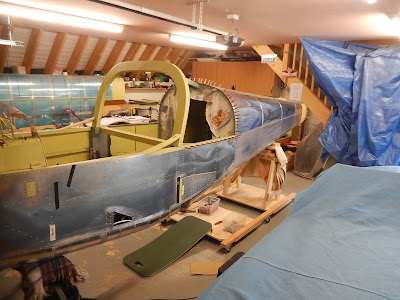 Main riveting complete and ready for the turtle-deck panels (around the back window) to be installed. 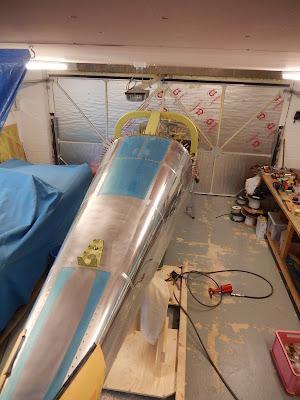 A view looking down gives an idea of the length of the fuselage which now takes up almost the whole depth of the garage.  There will be just enough room to get the engine installed but not the fin/rudder or propeller. 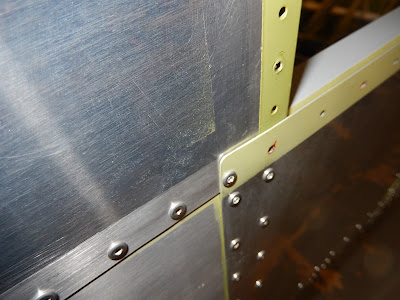 Of course something had to go slightly amiss during the joining process and it's shown here - the top skin should sit over the lower skin.  I didn't notice the error as I pulled the two halves together and it didn't help that I did all of the joining on my own.  Fortunately I spotted it before the turtle-deck panels were installed.  It only meant drilling out 10 rivets and then flexing the skins apart carefully to to get them in the right place. Unfortunately I'd made the same mistake on both left and right sides of the fuselage! 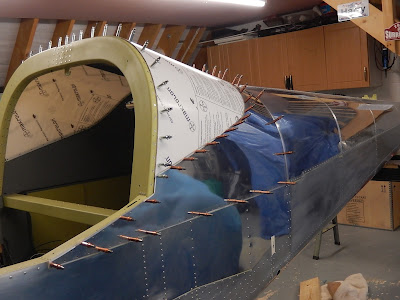 Next job is to install the turtle-deck panels and prepare the rear window.  Here the panels are in place and cleco'd with the perspex window ( a flat sheet which has to be bent to the right shape in situ).  I was very nervous doing this in case I damaged the window but so far so good.  The forward window fixing holes are then match-drilled into the roll bar and then with the window removed, the roll-bar holes are opened-up to final-size and tapped with 6-32 UNC threads for the securing screws.    The window won't finally be installed for a while - access is needed to finish the fuel tank installation and I have to complete painting the roll bar.  I want to leave the painting until the canopy installation is done as that may produce some scratches etc. 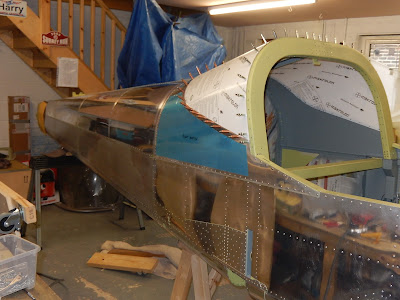 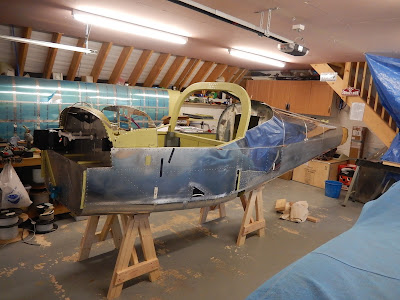 Finally with the rear window removed and the fuselage positioned onto both lower trestles where it will live until the avionics are complete and the engine cowlings and landing gear are installed over the next few weeks. Before all of that it's inspection time again.