It;s about a month since my last post and lots of little things have been progressing and a few milestones achieved.

Firstly, I completed the main electrical system wiring - battery distribution and circuit breakers.  I also completed the G3X display system (less engine sensors) and got power on for the first time.  So now it both rolls around and lights up! 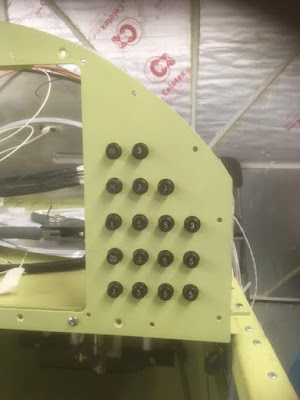 These are the circuit breakers, which replace the standard Vans' supplied fuses along with the Vans' switching unit.  I've actually mounted the breakers on a sub-panel which can be easily removed from the main instrument panel for ease of maintenance. 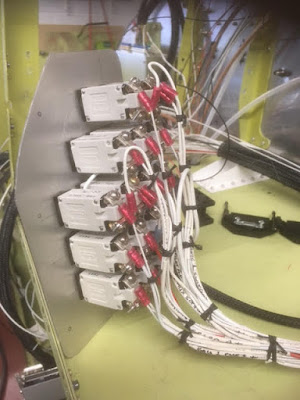 Rear view of the wired circuit breaker panel - this is before the sub-panel was completed with anchor nuts and painted.  The final version also has insulating strips between each row of breakers as the terminals are all very close together and I need to prevent any shorts.  Now I understand why Jerry's aircraft has the circuit breakers set at 45 degrees and not vertical! 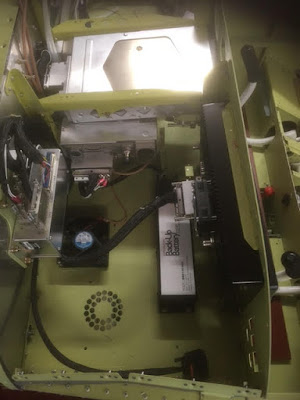 For those that have seen a standard RV12 with the Vans' control unit, this will seem very empty - it's the avionics bay behind the pilot's instrument panel.  My wiring is directly unit-to-unit so cuts out a large number of junction box connectors and consequently also the amount of wire used.   Hopefully it'll make for a more reliable and lighter installation.  However, going off-piste has probably added over 100 additional hours and a couple of months to the build, not including the new instrument panel which is necessitated by the need  to fit UK-mandated standby flight instruments. 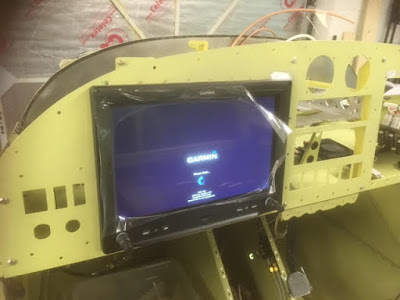 And so power-on for the first time.  You can't see the master switch here but the ignition module that takes up the 5 holes on the left is connected up behind the panel.  The only wiring not yet done is for the 6 switches in the centre and I won't complete this until the instrument panel has been covered and labelled, and also wiring a traffic detection system (I have the provisions in place but don't know which box to put on the end of the wires at present).  There is a 25-way disconnect plug for the switches to allow for easy instrument panel removal, so for the moment I'm just using jumpers across pins to simulate each switch as I run through testing.  A bit of the old day job for a change and thankfully no wiring errors! 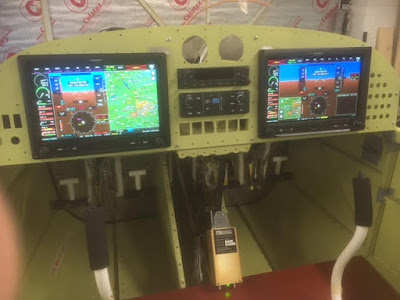 Here I've got all of the G3X running and most of the configuration complete.  I started with the basic set-up supplied as a down-loadable file by Vans on their website and then modified the config in-situ to suit my specific differences: I have a Nav/Comm radio instead of just a Comm, I have added an extra warning discrete for standby battery activation, and my ammeter shunt is not the Vans version.  I've also chosen to configure the fuel flow feature as Vans has you install the transducer, so why not use it?
The G3X uses a CAN bus for all of the boxes to talk to each other (originally developed by Bosch for cars) and this worked fine first time, but unfortunately it also allowed me to see instantly that both autopilot serves were defective as they reported 'HARDWARE FAULT'.  This was a know issue to Garmin back in February but they didn't issue any recall of service bulletin - it was down to individuals to see if they had problematic units.  Garmin have supplied me with a brand new pair of servos under warranty (not service-exchange items)  which is a relief as I don't want to start out with used components.

At this point I've taken all of the units and instrument panel back out of the aircraft so I can complete the panel itself - it will be covered in Carbon Fibre film and then labelled.  I've temporarily installed the version 1 (scrap) panel as the outer profile is correct and this will allow me to progress with the canopy installation. 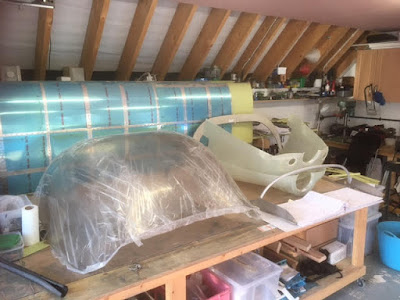 Here's the perspex canopy on the left next to the engine cowlings.  The upper and lower cowlings are sitting inside the canopy frame.   I'm not relishing this next stage!  One mistake or mis-handling and I could scrap the perspex bubble and it'll be very expensive to get another shipped from Oregon. 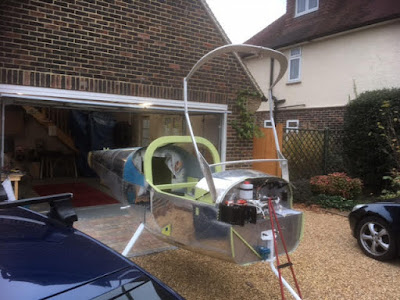 The first task is to prepare the frame (de-burr etc) and fit the gas-struts which hold it open, and then fit this assembly to the fuselage.  My garage ceiling isn't high enough to do this indoors so outside we go. 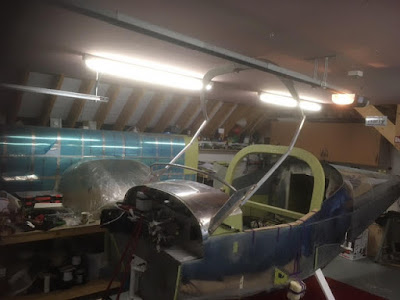 Here's the view indoors with the canopy resting against the ceiling - it's going to be awkward if I need to get in and out much! 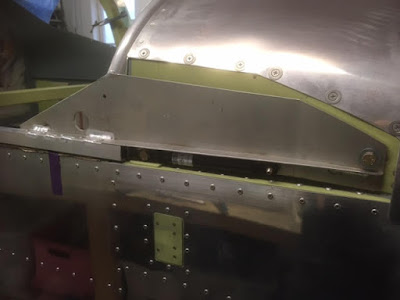 This is a view of the right-side gas strut.  My kit came with the original gas-strut version that had plastic end fittings.  There have been a number of incidents of the end fittings snapping and in one instance, the canopy rotated forwards into the propeller.  Therefore I've bought and installed the up-rated metal-ended struts. 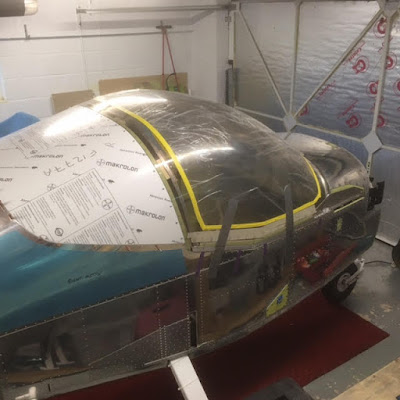 The rear window has to be installed to ensure the canopy is correctly aligned over the roll bar.    Here I've got the canopy in place and held with tape ready to drill the fixing holes.  Finger crossed I don't crack anything!  Getting to this stage is long-winded in adjusting the canopy position, trimming and polishing the edges to ensure the correct clearance all round.  It must have gone on and off a dozen times before I was happy. 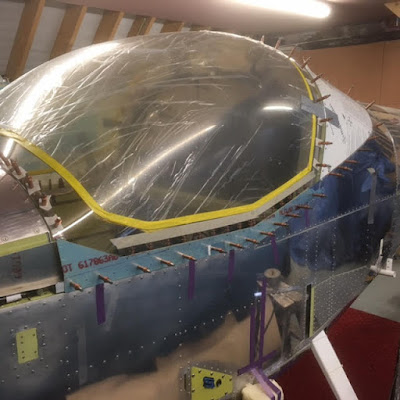 So finally the canopy holes in the roll bar and front tube are all drilled and the side skirts have been temporarily fitted.  I've also made the two small handles used to list the canopy. 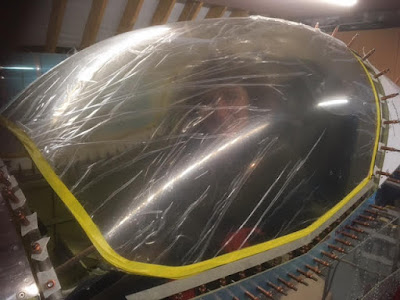 Just visible in the pilot's seat (actually on a pile of dust sheets and blankets!) is Deborah who was helping me to drill the canopy sides.

Now it all comes apart again so the frame and all metal parts can be painted before final assembly.  The last and probably most difficult part is to make the front skirt which requires a wet lay-up of fibreglass between the screen and the avionics bay cover.  This will have wait for a couple of weeks so I'm moving on to the engine cowlings. 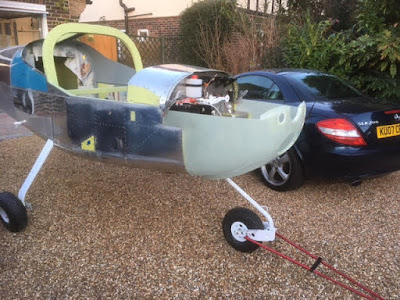 I started by trimming and sanding the cowling mouldings back to the scribed lines.  This took several hours to do both halves and there wasn't much to photograph.  I got covered in dust but at least I wore a mask so din't inhale it!
Here's the first trial-fit of the lower cowling.  I needed a lot more space on the garage floor to work on the cowlings as the canopy is now occupying the work bench so the aircraft had to be outside on the drive for most of the day.  That generated a few surprises for passers-by! 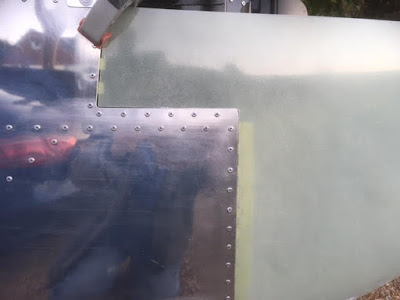 This picture shows the alignment of the lower cowling to the right side of the firewall and hinges which will secure it.  It's pretty close already so hopefully not much more sanding needed to get an accurate fit.

That's it for the moment.  More cowling and canopy work over the next few weeks and also a trial-fit of the wings so I can drill the flaperon arms and then fit the fuel tank.