Welcome back after the Xmas break, where little happened in the man-cave.  Time to crack-on and see if I can get this aircraft flying before next Christmas!

I spent a few hours before the Xmas break completing the flaperons which were awaiting some additional rivets due to a design change.  I managed to pick these and some other spare parts up (along with the mandatory baseball cap and logo'd fleece!) from the Vans factory during a fortuitous visit to the US west coast in early December.  The factory is very much like an English cottage industry affair - very similar to Morgan Cars if you've had the chance to go there.

Jerry popped in for the obligatory stage inspection just after Christmas - many thanks, and then with help from Sam, we have now bolted the completed flaperons to the wings and put them in the storage rack. 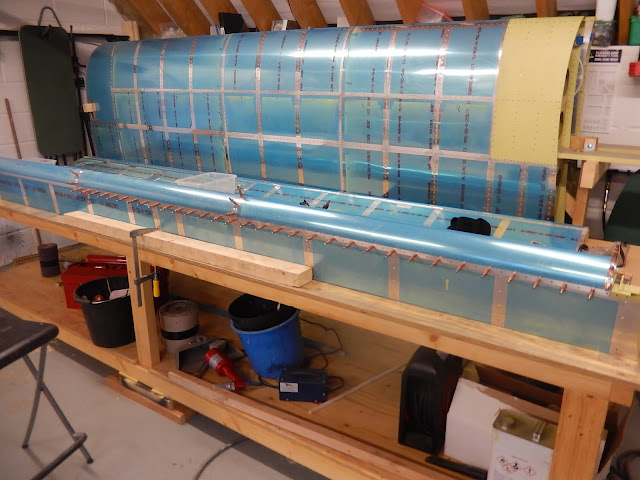 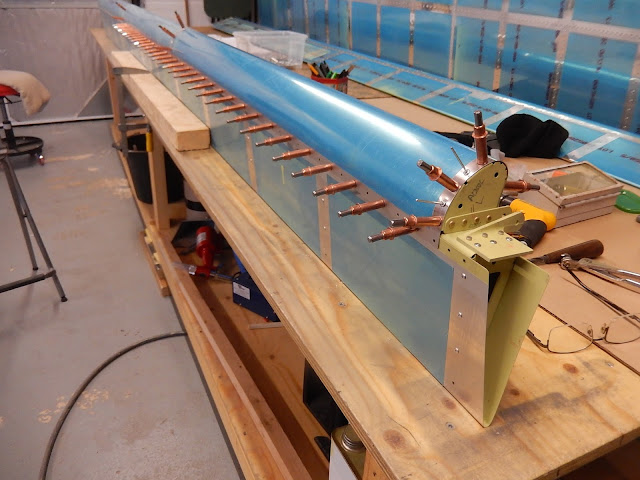 Another view of the left flaperon from the inboard end showing the hinge and actuating tab. 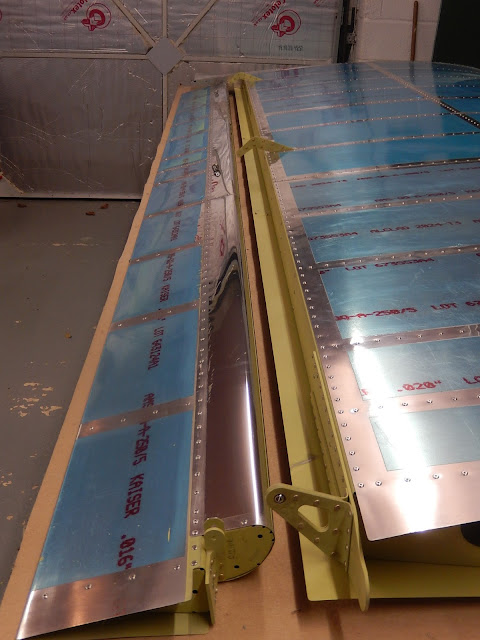 Finally assembling the left flaperon to the left wing.  The wing is upside-down for this so I can access the hinge bolts. 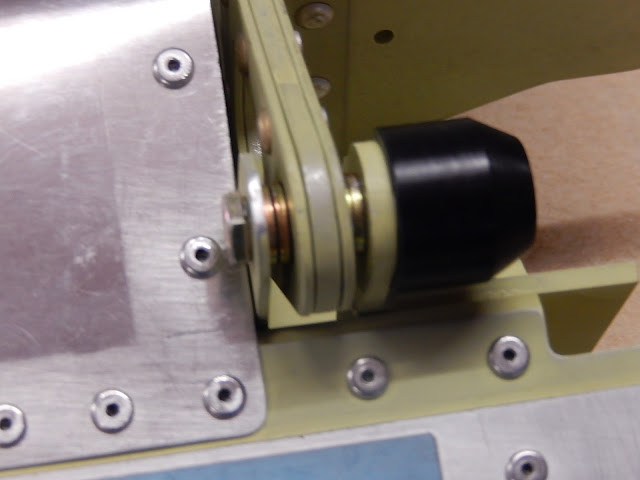 This is the left wing flaperon inboard hinge.  Getting the two spacer washers in either side of the bearing is a real fiddle.  Anyway everything is torqued together for good - shouldn't need to come apart again until painting on completion of flight testing! 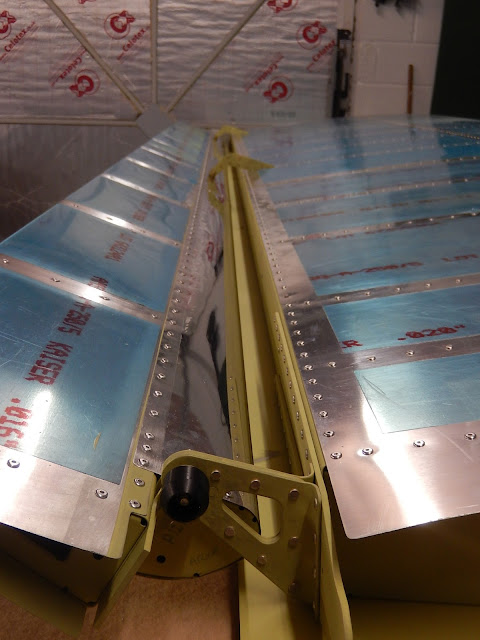 A view along he completed wing/flaperon assembly. 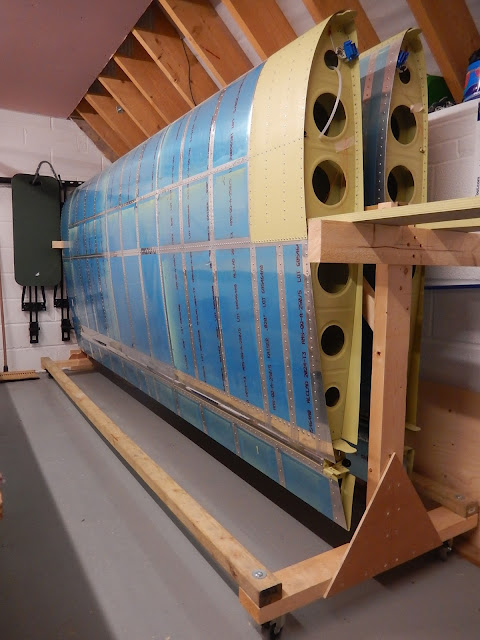 Both wings back on the rack with flaperons fitted.

Next stage is to start on the main fuselage/cockpit assembly.  This is the last major structure to build but also the most complex, and it has all of the avionics, wiring and flying controls to fit.  The first part is the centre-section bulkhead structure which supports the wings and main undercarriage. 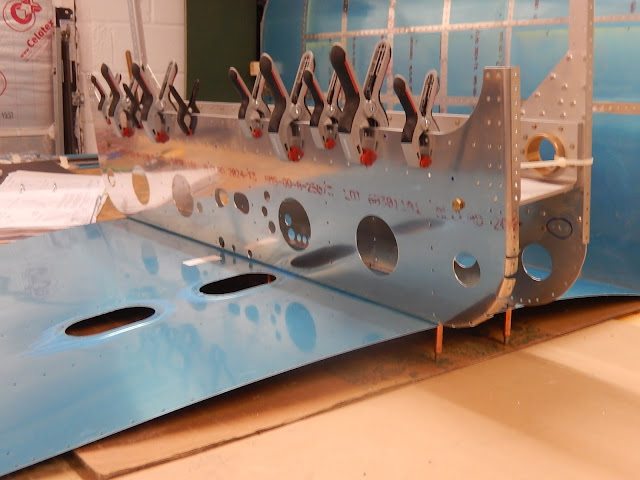 This view is of the main fuselage rear lower skin and centre section frame cleco'd together so I can match-drill the aft bulkhead (the piece with all of the clamps holding it in place).  73 holes to drill in pretty thick metal took quite a while and needed several sharp drills. 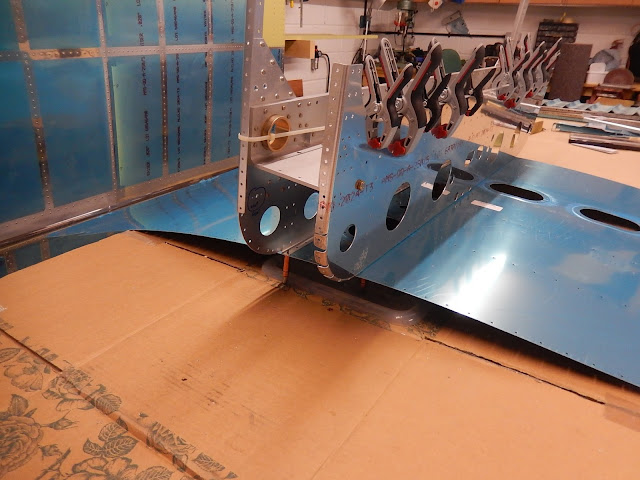 Same as above but viewed from the opposite side.  We're looking at the left side of the cockpit so the skin to the right in the picture will be under the baggage bay, behind the seats. 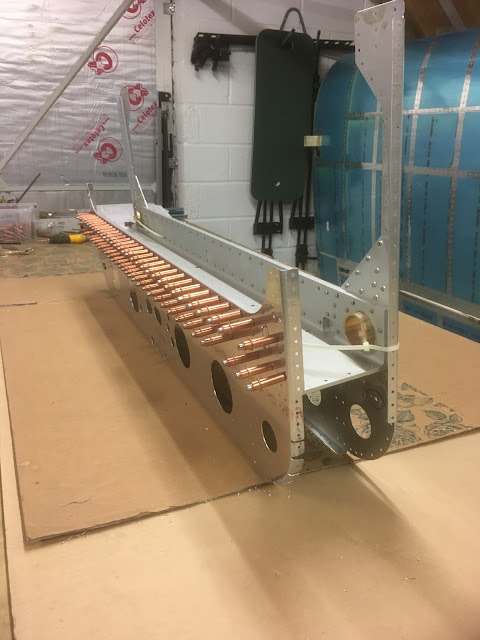 ﻿Centre-section aft bulkhead with the belly skin removed and all new holes cleco'd.

I then spent quite a few hours at the bench preparing floor panels, multiple brackets etc. for painting and will get as many parts ready before starting assembly.  This way I hope to save waste on paint and have a better time assembling large sections at one go.  I'm having an op on my right knee in a few weeks (I had my left one done last July) so would like to get the main centre section structure completed before that as I'll be immobile or at least unable to do much else for most of February.  At least having the knee op now means it's done during the coldest time of the year when I least want to be in the garage!
Posted by Harry'sRV at 08:28