Fortunately the minor operation on my right knee went very well, so much so that I didn't need crutches at all and am walking almost totally normally after just 3 weeks.  So it's time to get back in the garage, with the added benefit of some warmer weather.

As mentioned in my previous post, the aim now is to do much more preparation each time, so  reducing wasted paint and to give a greater time on assembly.  With this in mind I prepared about 70 parts of the centre fuselage - going forward through the build manual to try and catch all of the parts I'd need for a large assembly step.  Rather tedious sitting there filing and deburring for days on end but it's a means to an end as they say. 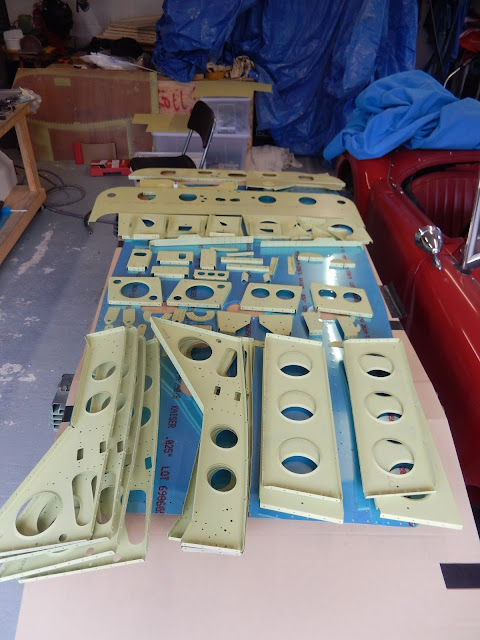 A large selection of fuselage parts painted and ready for assembly, sitting on top pf the main belly skin.

The first assembly job is to fit some corner pieces to the centre section bulkhead, followed by installing the aft bulkhead and side supports.  Included at this stage in the manual is bolting-in of two nylon guide blocks.  I've just put them in place loosely so they can be removed when the interior is painted before fitting out of systems. 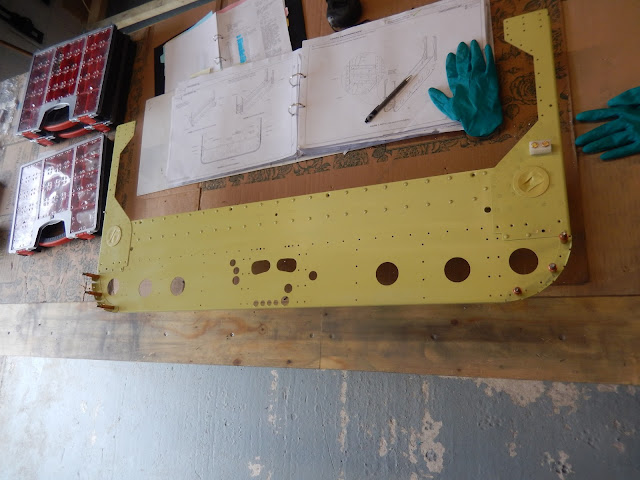 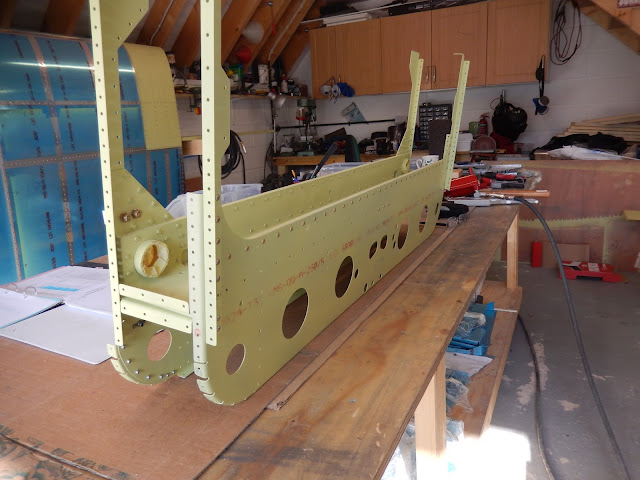 The centre section with the aft bulkhead installed.  Lots of aching hands and arms after hand-squeezing all of the solid 1/8th rivets. 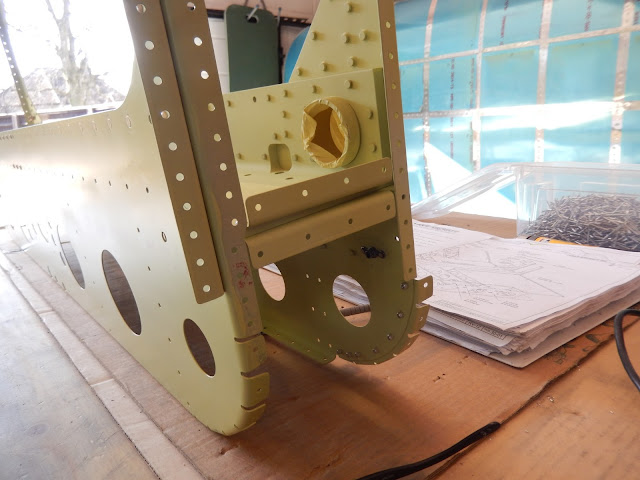 End view of the centre section (I need to touch in some of the paint).  The main undercarriage legs will, bolt to the underside of the large machined U-section between the two bulkeads.   The wing-pin bushes are still masked off and will stay like that until the interior has been painted. 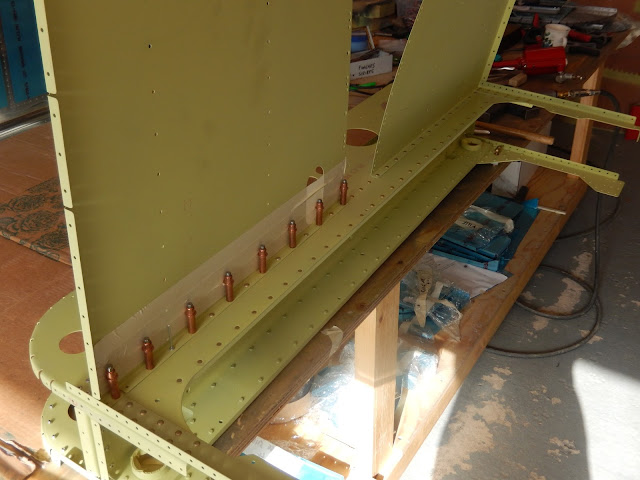 Fitting the baggage bay floor panels to the centre-section aft bulkhead.  Some of the end rivets are particularly awkward and I ended up using a pneumatic gun and backing block for a couple where squeezers wouldn't fit.   Haven't done much of that type of riveting since I was an apprentice! 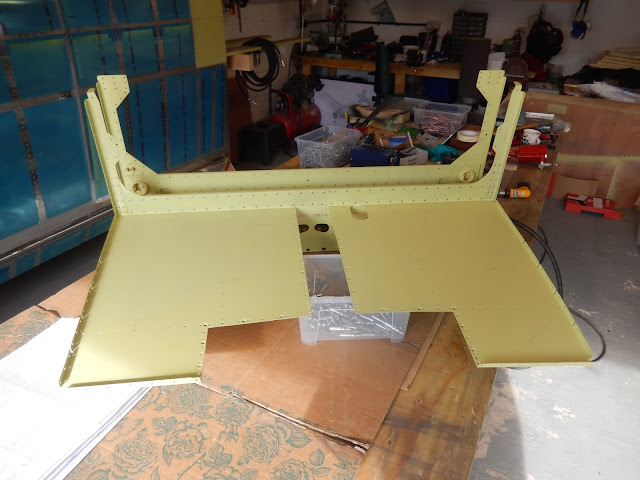 Baggage floor installation complete.  The hole of on the right floor panel is for the fuel tank outlet - the tank occupies the right side behind the seats and the baggage area is on the left. 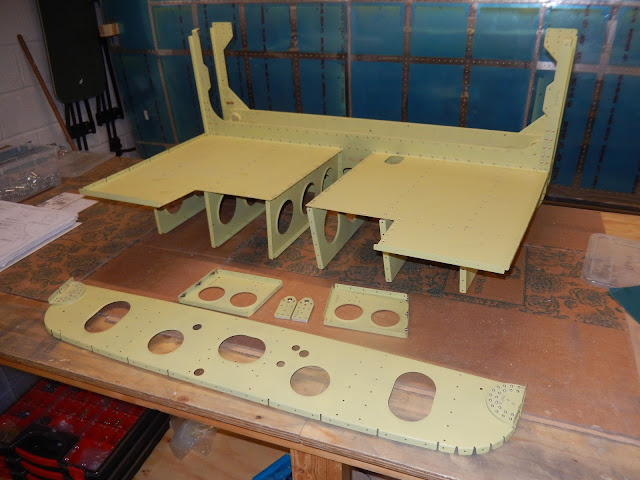 This picture shows the floor ribs installed below the baggage bay floor, and the next parts (rear spar carry-through, flaperon bearing blocks and additional floor ribs) ready to fit.   The two semi-circular rivet patterns are for the rear wing-spar locating point. 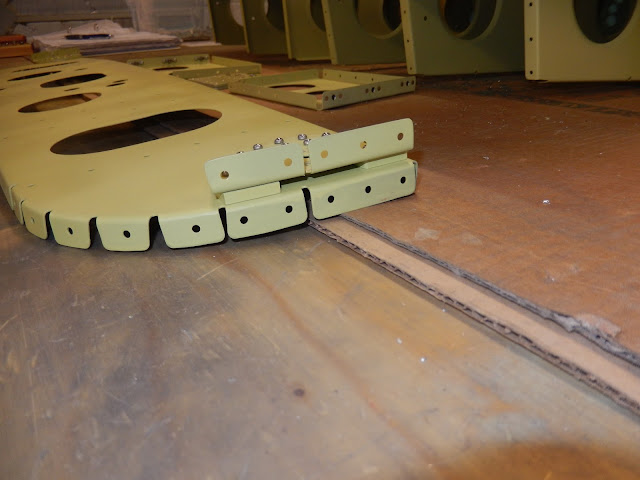 End view of the rear spar carry-through.  The 'pocket' is where the tab on the wing rear spar will engage in the fuselage.  There's no bolt to fix it - the only wing fastening will be two large pins through the main spars and the centre-section bushings shown above, to allow for quick wing removal/installation. 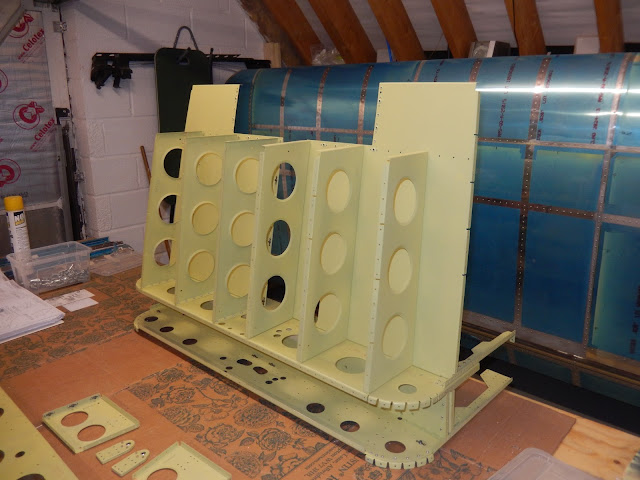 A view of the underside of the baggage bay floor showing the ribs installed. 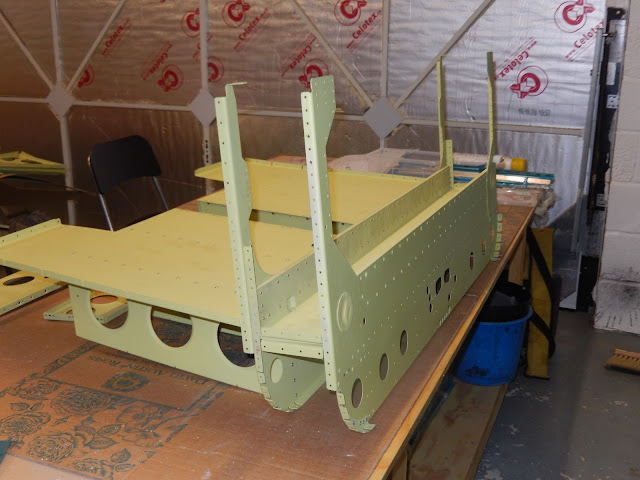 Finally a view of the front side of the centre section.  The seat structures will be attached here in the next stage of assembly which hopefully will continue very soon.