It's been a productive week - making good progress on the main fuselage.

To begin this session, I completed assembly of the baggage area floor structure - adding the bearing supports for the flaperon controls. 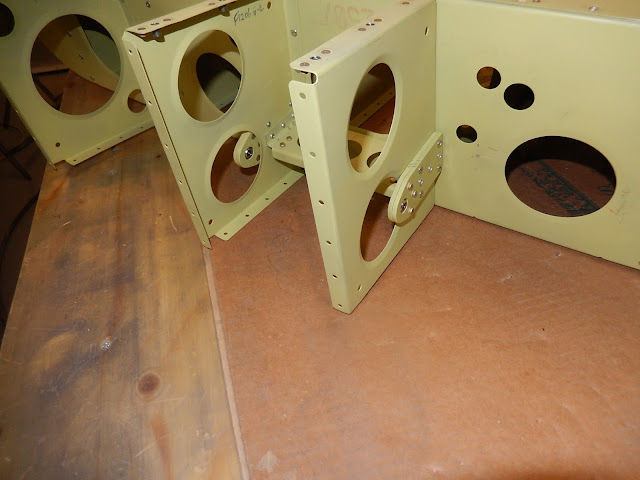 Close-up of the flaperon bearings and the support channel in the centre.  This area is the subject of a service bulletin from Vans where the support channel is known to crack at rivet holes after a few hundred hours in service.  My kit has the improved system with extruded supports for the channel between the bearings. 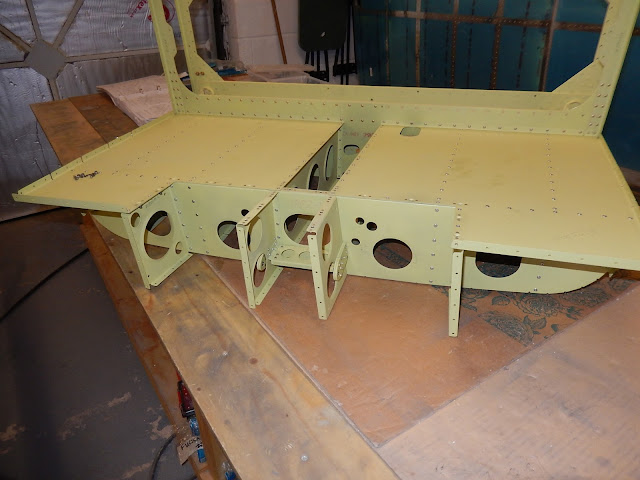 A view of the completed baggage bay floor structure.

So now on to the cockpit floor and seat structures.  Unfortunately I didn't take many intermediate photos - just got on assembling the 70 pieces that I'd previously prepared.  You have to follow the instructions very carefully in the right order or you can't get access to put in some of the rivets and also so you don't dimple the wrong holes!. 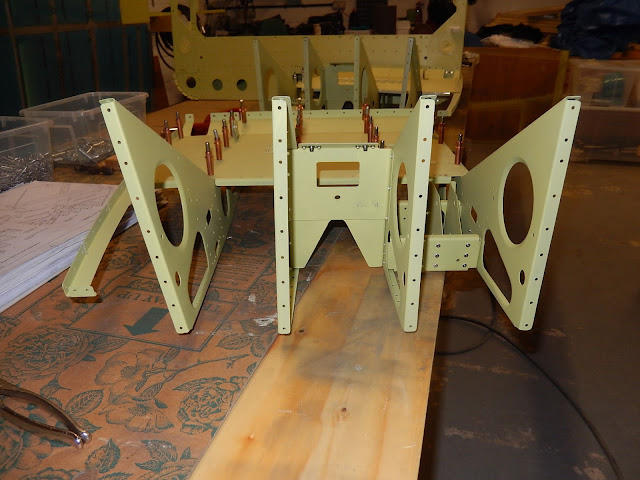 Looking aft from the front of the right (passenger) seat. The bracket in the centre of the middle ribs is for fixing the crotch strap of the passenger seat belt, and the small brackets to the right are for a control pulley. 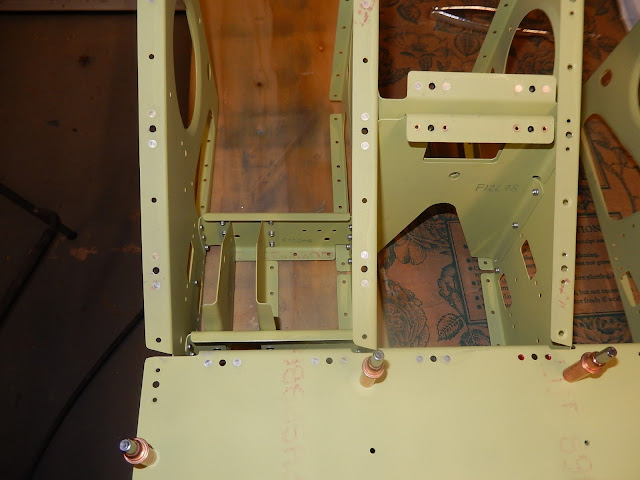 This is looking down on the same area shown above. 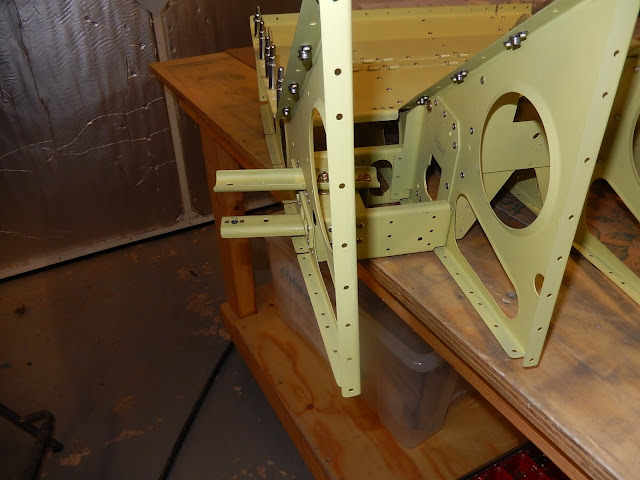 This is the left seat structure looking aft and showing the flaperon mixer which is protruding into the tunnel between the seats.  It'll be interesting to see this come together as I can't yet see how it works!  It's only moves about +/- 10 degrees fore-aft.  To the right of the mixer (left-side in the aircraft) you can see a thick doubler inside the second vertical rib.  This is an extra part needed if installing an autopilot so I'm taking advantage of doing it now whilst everything is more accessible. 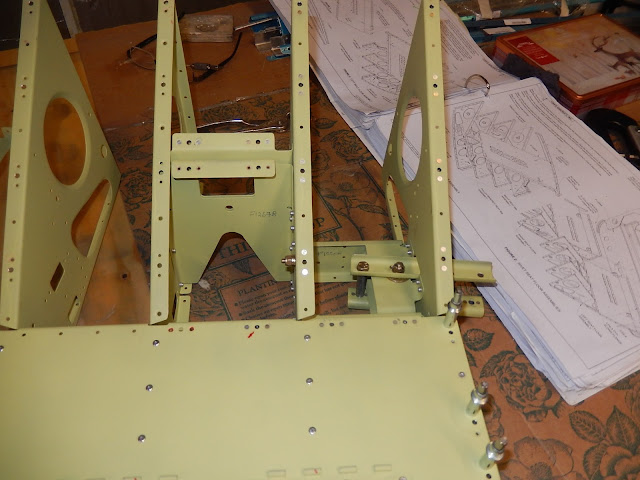 Looking down and forward on the pilot's seat pan with the flaperon mixer on the right. 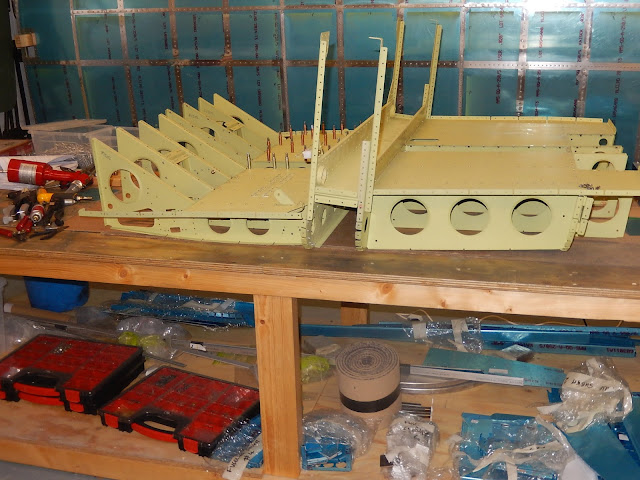 The two seat structures just placed in front of the centre section where they'll be riveted on the next build session.  It'll start getting two-handed to move about once these are fitted.   At the rear of each seat pan you might spot some small lugs sticking up at 45 degrees.  These are where the seat belt lap-straps are installed. The channel between the two taller vertical frames in the centre is where the main undercarriage legs fit. 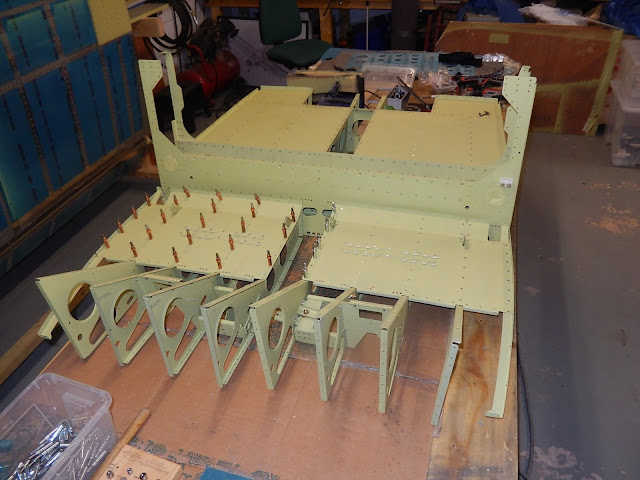 Final view from this session, looking down on the two seat structures resting against the centre section.   The sections of hinge running across the seat pan are to hold the bottom of the backrest - two positions allowing for adjustment for taller/shorter pilots.   I did make a mistake here - I had the end lug and space the wrong way round on all four pieces of hinge so had to re-make them.  Fortunately I had some spare hinge from correcting a previous error on the stabilator trim tab.

I also prepared a few other parts today so I can make another full day of assembly.  Then it's back to a several days of prep again but that'll have to wait as I'm away for work and holidays for most of March.
Posted by Harry'sRV at 09:25