Back under way (for a short while)

The last few months have been frustrating with little progress as my hand healed.  Anyway, it's good enough now to get some work done.  Unfortunately everything will come to a halt in late May when I have a shoulder operation so I'm trying to get as much done before that as I can manage.

First job is to progress the canopy and get the fibreglass skirt laid-up.  It's a job I've not been looking forward to at all. 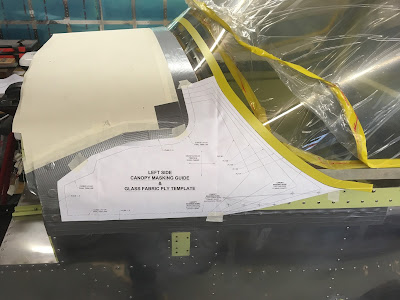 Here the paper template is laid on the fuselage the mark the correct lay-up position.  The template is then used to cut 5 layers of glass cloth for each side.  Across the centre of the windscreen there will be 10 layers of fabric. 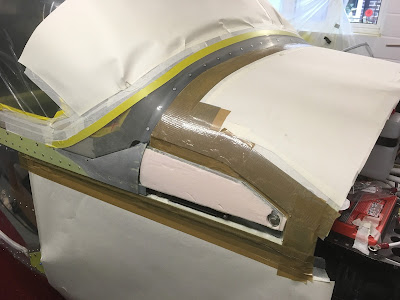 Lot's of masking up is needed to protect the canopy perspex and to create the correct outline of the finished fibreglass.  The parcel tape is covered in car wax to act as a release agent so the finished lay-up can be removed from the aircraft.  Below the yellow tape line, the perspex has been scuffed to create a surface the fibreglass resin will stick to.   To the left of the pivot bolt is an area of foam which has been glued to the canopy frame and sanded to match the fuselage profile.  The fibreglass will stick to this as well as to the windscreen. 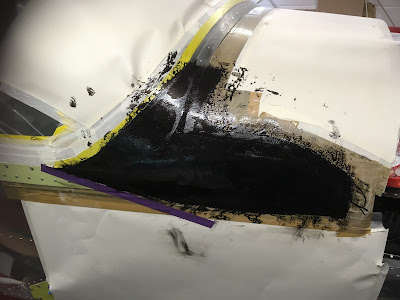 This is the first layer of the fabric and epoxy on the right side.  Very messy job!   The left and right sides are done first and allowed to cure overnight and then the centre is laid-up the next day. 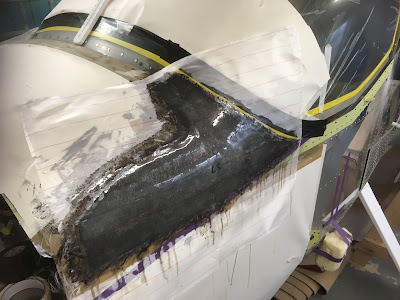 After all five layers have been placed, a sheet of peel-ply is placed on top and liberally coated with resin.  When dry, it easily peels away (hence the name) and leave a surface ready for filling or sanding. 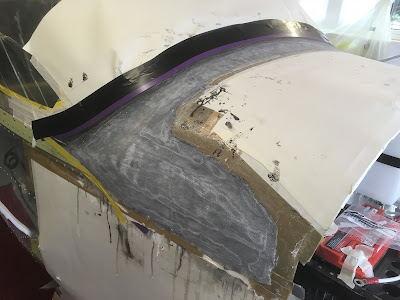 This is after the peel-ply has been removed and the initial sanding has taken place.   Next I have to fill any areas that have sunk (where not supported underneath).  The filler is epoxy resin with micro-balloons added to make it light  and easily sandable. 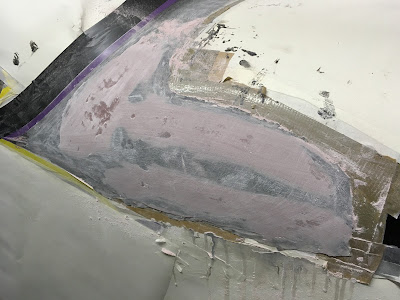 Here's the filler in the midst of being sanded to final shape. 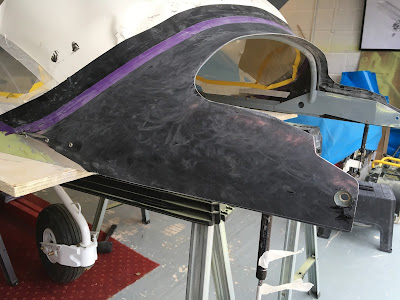 After more coats of resin and lots of sanding, this is the final finished canopy skirt having been trimmed to the template dimensions.  The holes for the canopy bolts have been cut out and the foam inside reinforced with more epoxy. 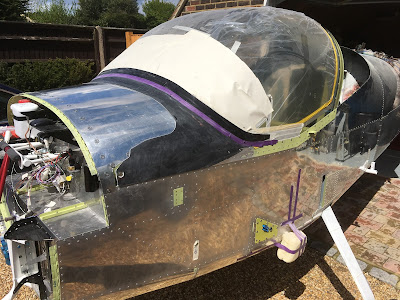 A view with the canopy refitted.  Overall it turned out pretty well.  There are a few small areas that need additional filler and I've completed them using P38 instead of expoxy -  much quicker and no need for additional strength.  It's taken around 3 weeks to do this job and I'm glad it's over!

So on the the engine and preparing it for installation.  I have to install carburettor drip trays so that any overflowing fuel from the float chambers doesn't drip onto the hot exhaust.  I'm also adding a Skydrive carburettor heat system.  This isn't a requirement, but for me just seems like common sense.  Unlike the system on Lycoming or Continental aero engines, it doesn't use hot air from the exhaust shroud into the intake, so there's no loss of power.  Instead it uses small hot water heaters to warm the butterfly ate of the carburettor body. 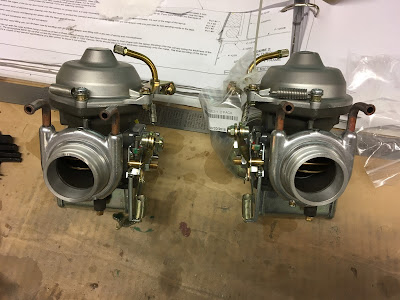 Here are the carbs on the bench with the heater units installed.  These are pressed onto the  carburettor bodies in a big vice and a risky business if they don't go on square.  There's no way to get them off again if it goes wrong! 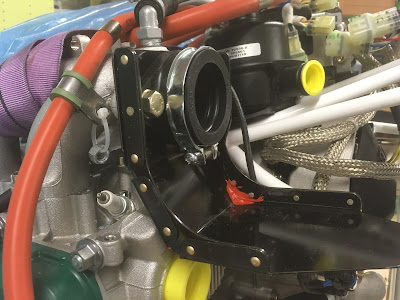 This is the left drip tray installed and ready for the carburettor to be refitted. 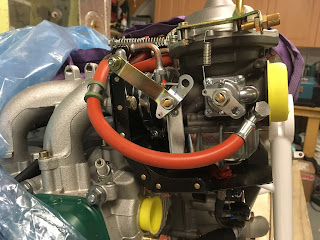 And now the carburettor is installed and the fuel pipe reconnected.   Not clear in the picture, but I've also fitted the recently released throttle torsion springs instead of the previous tension springs which were prone to breaking. 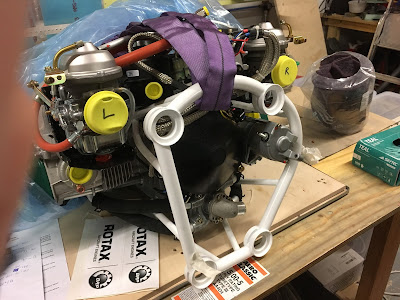 The engine mount ring is fitted and the engine is ready to be installed.  Hopefully that'll happen next week.

Final job this time was to install the heater door to the firewall as it's easier to rivet before the engine is fitted. 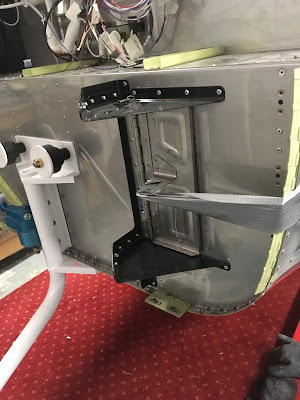 The tape is holding the heater door shut whilst an RTV gasket cures, which will provide a good air-tight seal.  You can also see the two lower engine mounts which are temporarily fitted to hold the nose landing gear in place.

That's it for the moment.  Stage inspection is due shortly and once the engine is fitted, I can complete the wiring and finally fit the instrument panel