Lots of catching up!

It's been almost 4 months since my last blog entry and much as happened.  I had a shoulder operation in late May, followed by 6 weeks of no aircraft building and then a gradual return to-work; now after 12 weeks being able to do most things.  In the few weeks before the op and in the most recent six weeks, I've made huge progress, helped along the way by some willing volunteers.

This post will be mostly pictures a a few captions to bring things up to date. 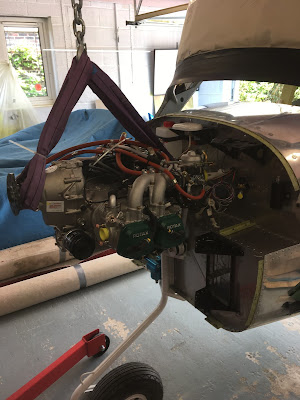 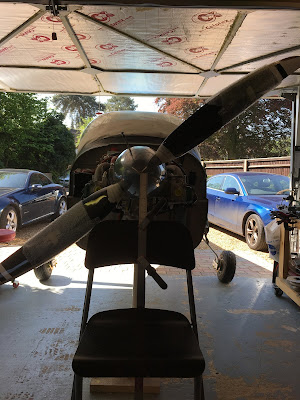 Propeller and spinner.  The spinner was a bit of a pain but looks OK now. 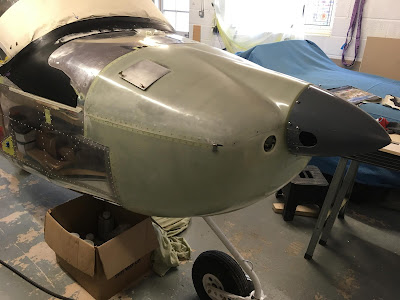 Cowlings complete.  Not straight forward as it didn't line up with the propeller spinner so needed much rework of mouldings and the main hinge on the right side.  As I've mentioned before, I hate working with fibreglass! 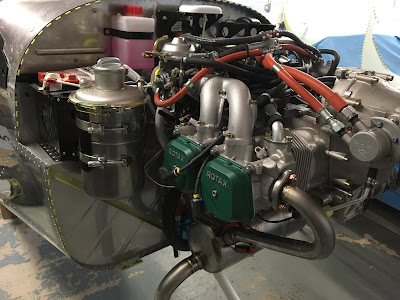 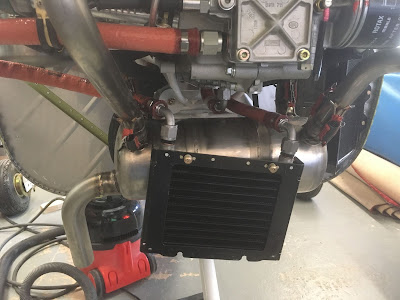 Oil cooler and hoses.  They really didn't want to reach! 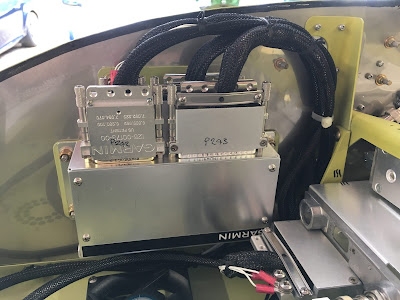 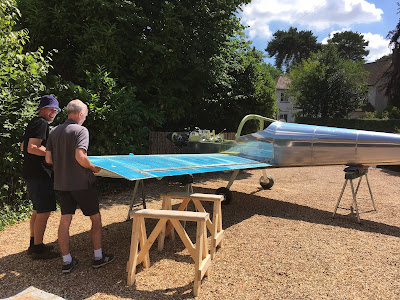 Trial fit of the wings.  Needed lots of trimming wing skins and the top of the fuselage cut-out where the spar enters, to eliminate interference.   Thanks to John and Peter ( 2 retired petrol-head dentists). 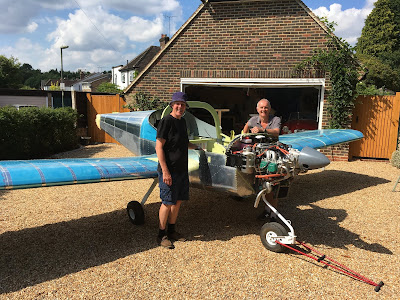 Wing installation completed!  Starting to look like a real aeroplane.
The following day I also completed the flaperon control rigging and drilling with help from Martin and Andy - sorry guys  no photos! 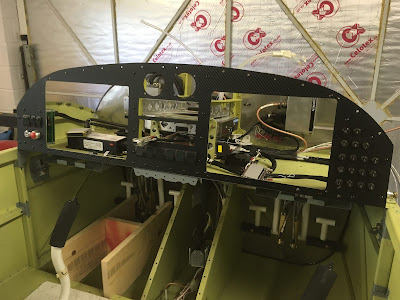 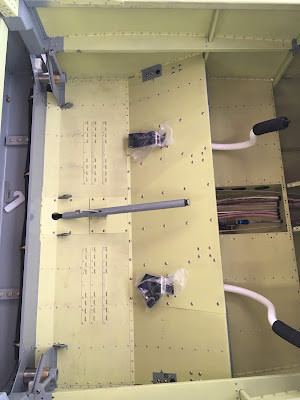 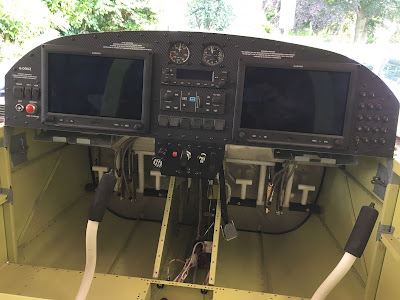 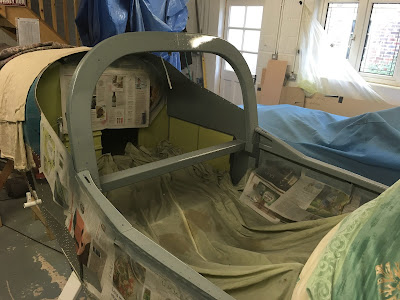 Remaining interior painted where needed (areas not covered by carpet or trim) ready for the rear window and fuel tank installation. 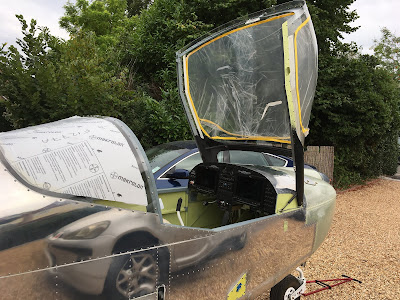 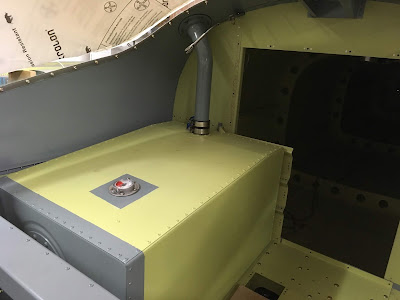 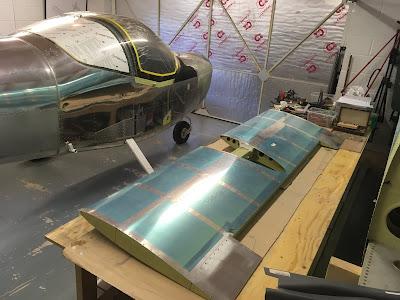 After over 2 years in storage, the horizontal stab is back on the bench for re-work.  Needs several strengthening service bulletins embodied and I'm fitting the newly released fibreglass tips. 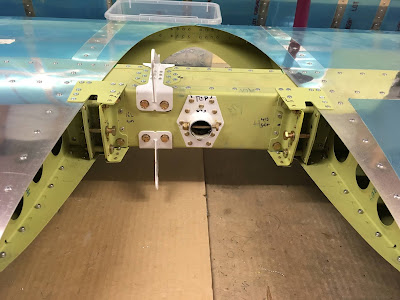 SBs completed - beefed-up hinge brackets and control horn mountings.  Not too difficult and definitely worth doing now before final assembly or painting. 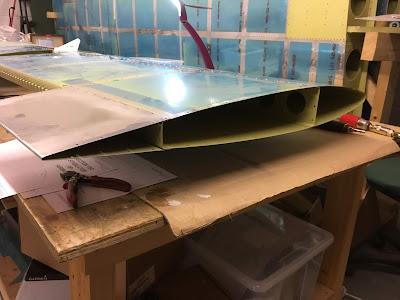 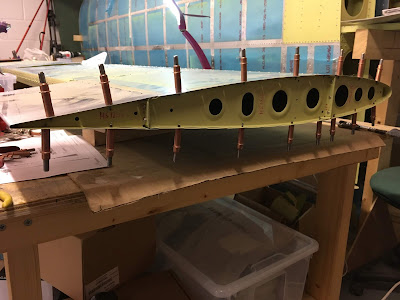 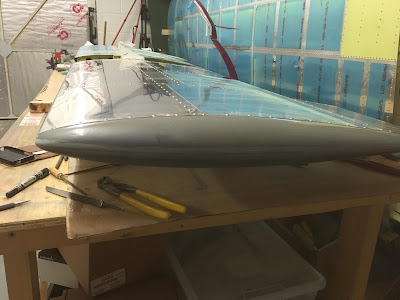 The finished job with the new fibreglass tips.  Makes it look better but probably has no aerodynamic benefit! 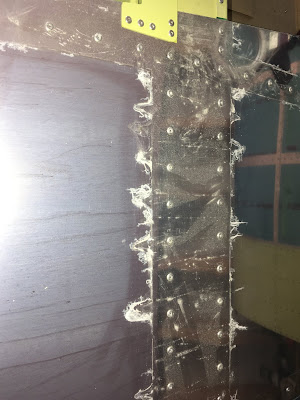 The bad news.  Whilst stored in the roof of the garage, moisture has got in between the skin and the blue plastic covering in two sections and started corrosion.  Fortunately it was only light and on the surface so polished out without removing any significant metal. 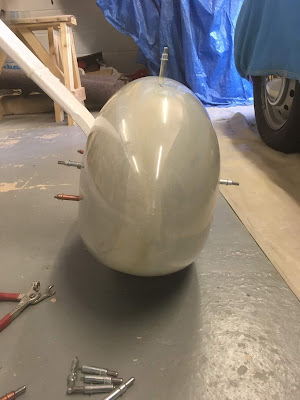 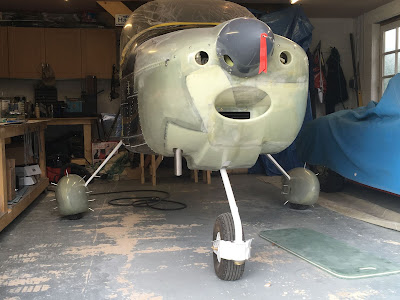 Both main wheel pants completed apart from fitting the anchor nuts that hold the two halves together.  You can also see the lines inside the engine cowling where the heat shield material has been added and the cooling duct for the oil cooler and radiator. 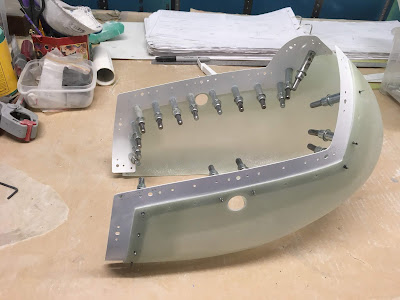 Finally for the moment the nose wheel pant in progress.  This is the front half waiting for the interface pieces to be epoxied and riveted in place.

Currently I'm aiming to complete the final construction items in the next two weeks and then move the aircraft to Fairoaks for final assembly and ground testing.  Hopefully no more injuries will get in the way!