Who'd have thought that one year has passed since my RV12's first flight.  Time to post the final update on the build!

Since gaining the full LAA Permit-to-Fly in January 2019, the aircraft has flown an additional 35 hours, making a total of 41.5 in the first year.  That 35 hours under my control is more hours than I'd flown cumulatively in the previous 4 years!  Fortunately my check-out was very quick, one flight with Peter Lennard, a commercial pilot from work who previously instructed on Eurostar's.  We mainly concentrated on circuits and then some stalls to ensure I was safe.  The en-route handling is very easy.

Anyway, the major outstanding item for the build completion was to get the aircraft painted.  This had been planned for January/February.  As with most things, this slipped, so we flew the aircraft around the country in bare metal for a few months.  Our longest trip was to Bolt Head in South Devon - about 90 minutes each way, and my first landing at a farm strip in the RV.  Anyway, our paint slot was finally available and I took the aircraft to Mick Allen's Turweston workshop on 1st July.  I then stripped the aircraft down ready for Mick and his sons to work their magic. 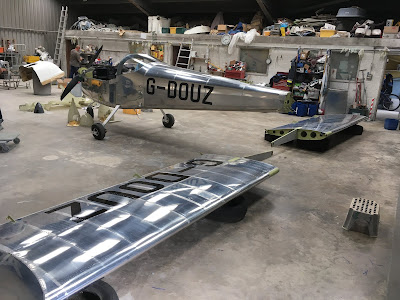 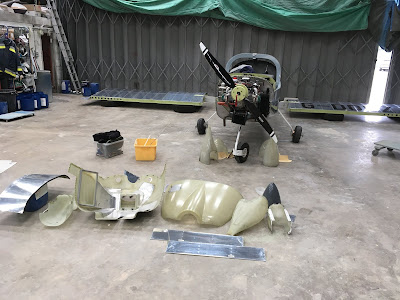 I made a view visits during the process to see how things were progressing   A huge effort went into sorting the fibreglass parts, particularly the engine cowlings and wheel spats, which were full of pin-holes as supplied by Vans (I think newer kits now come with gelcoated fibreglass with a much better finish).  The constant filling and rubbing down was something I definitely didn't want to do myself - I hate fibreglass!

I did want to help out getting the stripes right per the paint scheme I'd supplied to Mick (a partial copy of one I'd seen on-line) and he went to considerable trouble to ensure I was happy with the end result. 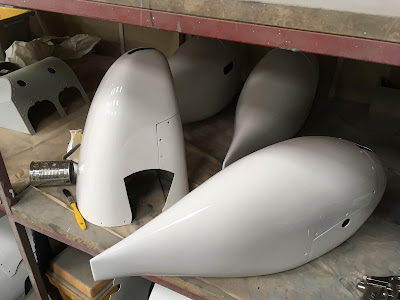 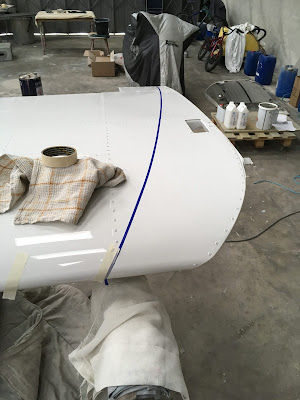 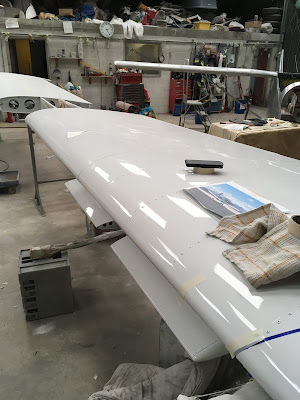 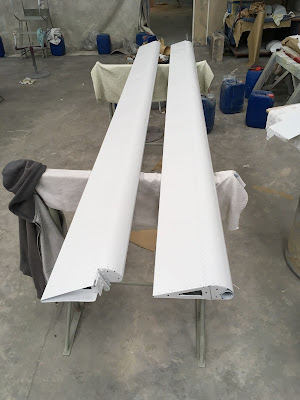 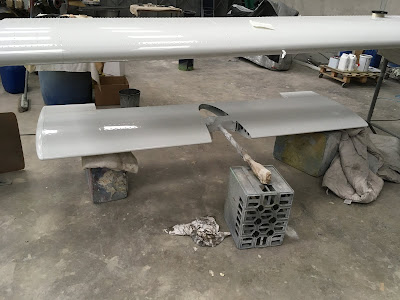 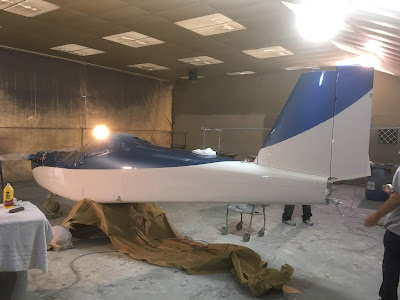 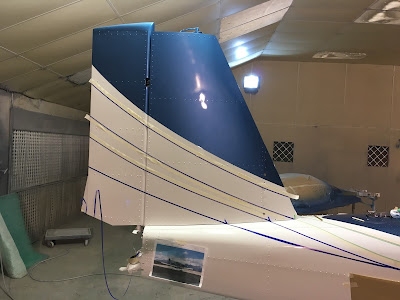 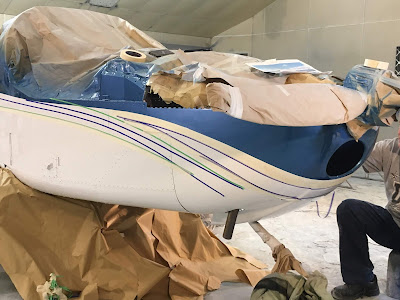 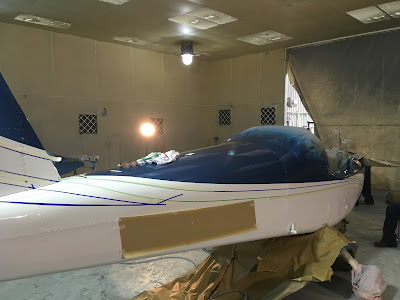 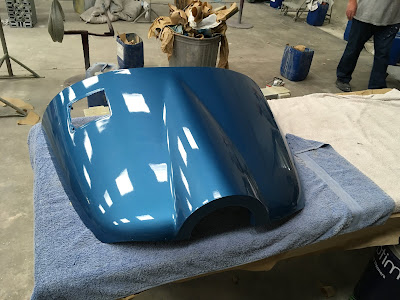 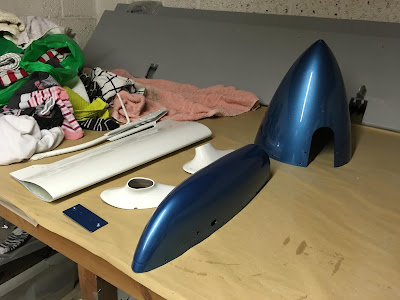 We had a family wedding which kept me away from the paint shop for the last couple of weeks, but with the LAA rally looming and Mick aware that I really wanted to attend, he let me know that all was ready for re-assembly, so I duly popped up to Turweston for two days, culminating in a re-weigh and then final inspection and sign-off by Jerry. 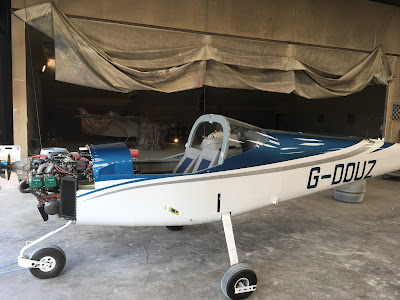 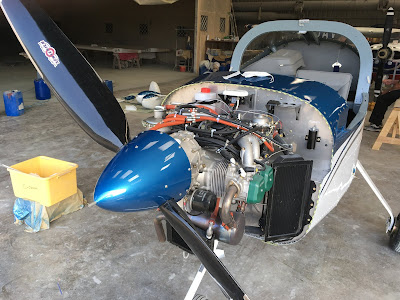 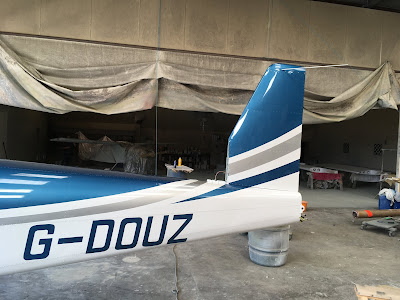 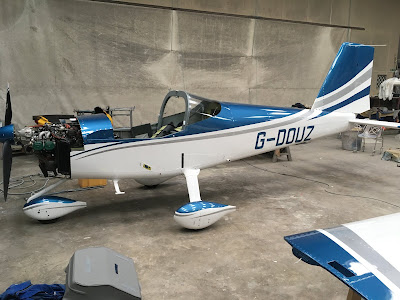 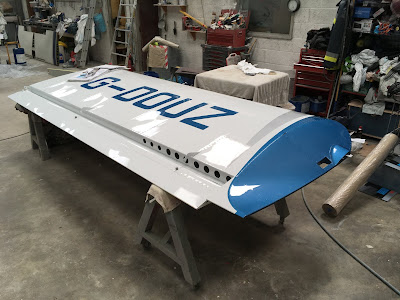 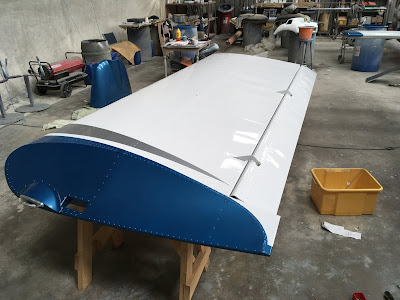 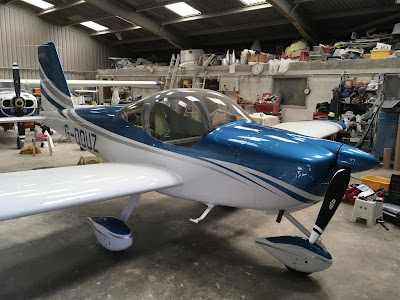 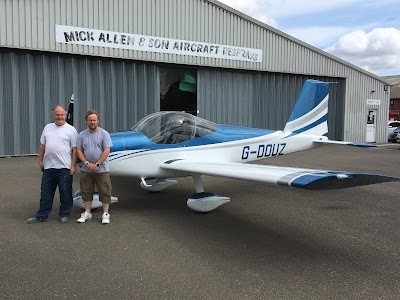 The aircraft is certainly not the lightest RV12 ever built (it has every availabe option and more), but still allows for two 12 stone (168 lbs) passengers, full fuel (75L) and the full 50 lbs of baggage, so does everything I want.  One additional good result is that the C of G has moved aft by 1.5" from the pre-painted condition, so I can get rid of the 15 lbs ballast weight I was carrying in the baggage bay.

I collected the aircraft on 29th August and then flew to Sywell for the LAA rally on the following day.  I'm delighted with the end result and the aircraft received lots of positive comments.  This was also my first experience of camping since 1986 and maybe something not to be repeated too quickly (no sleep due to generator noise for the security lights) but I was still very pleased to get there! 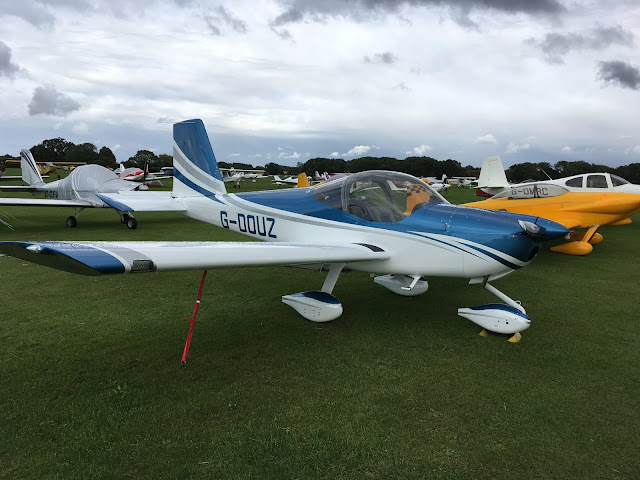 Since the rally, I've installed the canopy seal kit which has got rid of the huge draughts in the cockpit.  I've also had to replace the small bush in the propellor spinner that supports the pitot tube, so there's a small amount of paint touch-up to do.  Other than that, the aircraft has been 100% serviceable for the whole year.

Plans for the future include changing the current battery for the latest Vans-specified Lithium version which will save 10 lbs.  This is a job for the annual inspection in January along with replacing the rear window with the newer moulded version as mine has small cracks around some of the screws.  I also have to change the No. 2 exhaust down-pipe as there is a Vans service-bulletin concerning fatigue cracks.

Flying the RV12 is a delight, with amazing visibility and really light but well-harmonised controls.  Going back to the PA28 is like driving a bus!

That really concludes the story of building my RV12.  Next year I hope to do a few longer touring trips with my wife Deborah (a happy passenger fortunately) - maybe around the Scottish Islands and to the Scilly Isles.  I hope you've enjoyed following the blog.