On Saturday 17 November G-DOUZ finally became an aeroplane!  In the safe hands of Jerry Parr, my LAA inspector and fellow RV12 builder, the first flight lasted 30 minutes with about 6 circuits of Fairoaks. 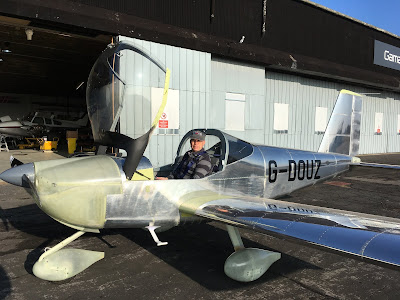 Jerry about to depart on the first flight. 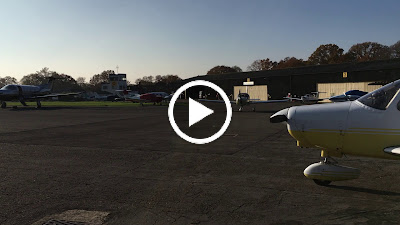 A short video of the aircraft returning.

Following the first flight which went fine with no issues at all (Phew - that was a relief), we removed the cowlings for a good look at the engine bay - checking for any leaks and anything loose.  Then a good look around the rest of the aircraft before preparing for a longer flight with me on board to do some more shake-down tests. 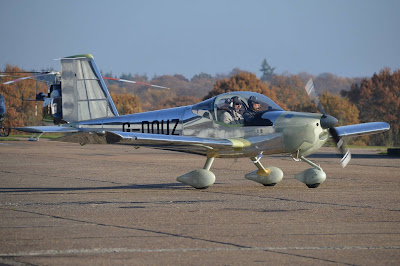 Here we are taxiing out for the second flight  -planned to be the required 2 hour duration test.  We achieved everything we wanted and then did 10 touch-and-goes and the final  landing to build towards the 15 landings the LAA require for the Permit test programme.

So at the end of day 1, the aircraft had flown 2 hours 35 minutes and completed 12 landings with no snags and no adjustments needed.  Not a bad day at all!

Last job of the day was to re-fuel ready for the next stage. 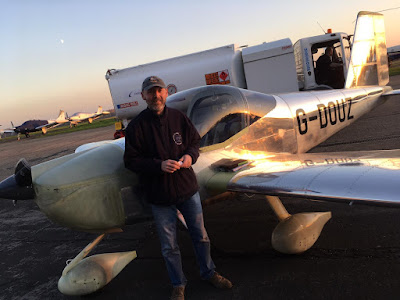 A happy owner with a home-built aircraft that flies!

With the weather behaving we decided to try and complete the entire test programme over one weekend, so Sunday morning saw us load the aircraft to maximum weight (1320 lbs/ 600Kg) with full fuel and some ballast in the baggage bay, in preparation for the performance height climb test.

I didn't get any decent photos in what was a busy flight and it was quite turbulent but did take screenshots from the Garmin G3X to record specific test points, so here are a few which show just how good an RV12 really is! 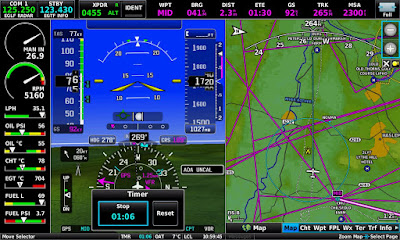 First minute into the 5 minute performance height climb.  This is flown at best-climb speed of 75 knots and Jerry did a great job keeping within the 2 knot tolerance and slip-ball centered when you consider the significant wind and bumping around!  The G3X has a built-in data-logger which records all of the engine and air data parameters each second, so I didn't need to write everything down.  You can easily analyse the data in a spreadsheet. 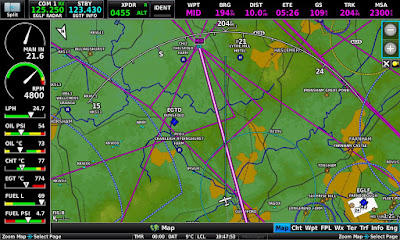 En-route to the test area from Fairoaks.  This is the map in front of the co-pilot/passenger but can be switched into a full instrument display as shown in the other pictures. 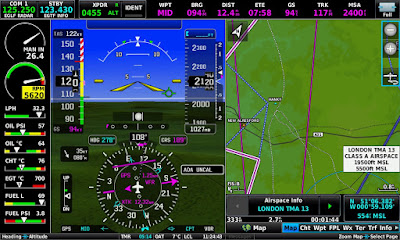 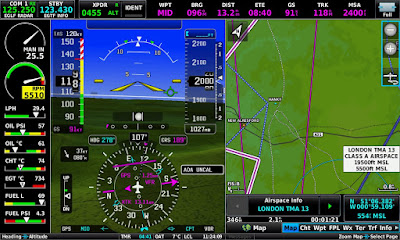 Max continuous RPM test.  Some people regularly fly their aircraft like this but I think something more economical (4800 rpm) is fine as this will still produce 105 kts.    Ignore the fuel-flow reading (Litres Per Hour) as it's currently garbage - this needs to be calibrated across several tanks of fuel.  The realistic figure is nearer to 18 LPH.


We also carried out a Vne (Never exceed speed) dive to 136 kts and checked that the controls performed correctly with small and gentle inputs - all a non-event.
The last major test items were stalls in clean, approach flap and full flap conditions and all went fine - a slight right-wing drop as expected but nothing unmanageable. 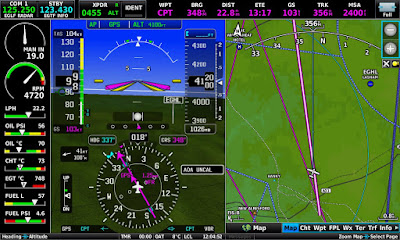 Finally a bit of avionics play-time for me,  to check the autopilot and radio. Having installed loads of autopilots in light aircraft, I was really surprised at just how good the G3X experimental autopilot is - it's miles ahead of anything I've played with before in certified general aviation aircraft and the capabilities are huge.    Above you can see we're tracking towards a GPS waypoint (CPT) with a huge crosswind of 41 kts and its holding us dead on track.  Should make light work of long-distance flying.

On completion of this flight which lasted 2 hours 45, we completed a further 3 landings to bring to the total to 15.  No snags and a great aircraft to fly.

With the test flying all completed, we wrapped up the paperwork and it's all been submitted to the LAA for review and hopefully the issue of a full Permit-to-Fly.  As soon as I have that I can get checked-out and finally fly the aircraft on my own.

All being well, I'll get to fly about 10 hours over the winter before the aircraft goes to the paint shop in January/February and then I have to take it all apart again!