After a short break from RV activity with a holiday in Devon (nice place to cycle along the Tarka Trail), and also some paying work to address, it's back to aeroplane building.
Of course, not everything goes to plan, so I've made a couple of un-forced mistakes. Nothing too serious but a bit time-consuming to put right. 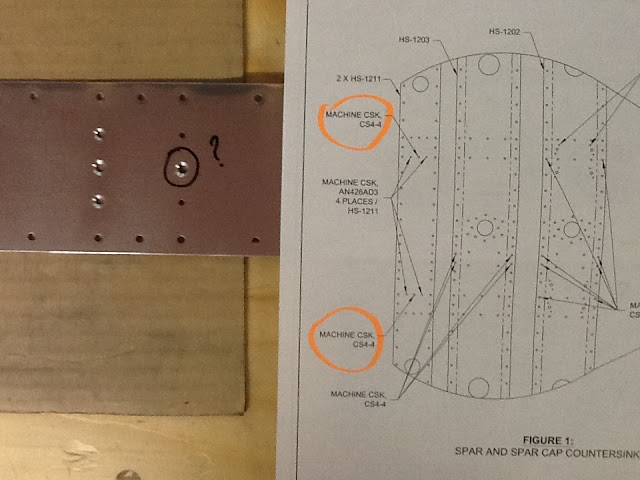 Unfortunately I'd countersunk the wrong hole in the horizontal stabiliser lower spar cap (a
structurally important bit to the uninitiated!).  I took the picture and checked with the factory to see if the situation could be salvaged, but the response from Vans was 'Scrap it'.  Fortunately we had the right material at work so I've been able to make a replacement using the damaged part as a pattern, so other than 4 hours of additional work, there's no lasting damage.
For the bits I'd already completed, it was time for the first inspection by my LAA inspector.  There are laid-down tasks that have to be overseen and signed-off before moving on and initially, these were inspection of the completed fin and rudder skeletons before the skins were installed.  The LAA have produced an RV12-specifc inspection document which was the first my inspector had seen - it's probably based on information he'd provided!
Fortunately there were no issues on these parts, so I've been able to progress and finally rivet the skins. 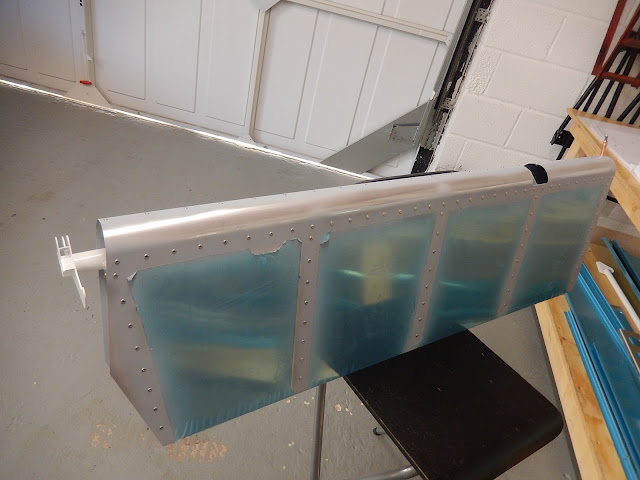 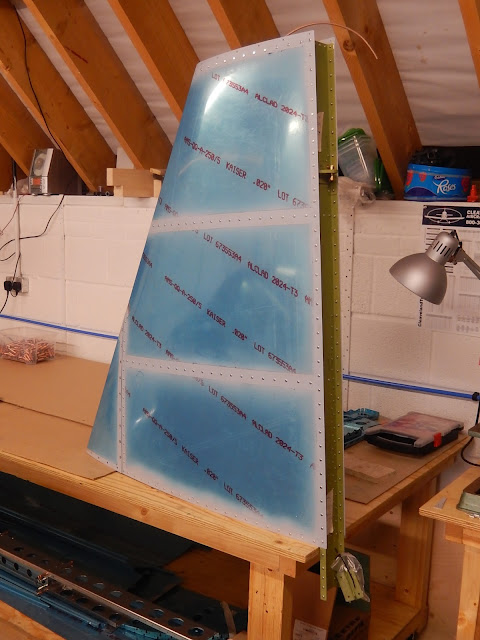 And the vertical stabiliser (the fin).
I've also managed to complete the two halves of the anti-servo tab (this forms the small control surface on the back of the tail-plane and is controlled by the pitch trim servo motor - there is no manual pitch trim in an RV12.  The control rod goes between the two brackets in the centre of the picture. 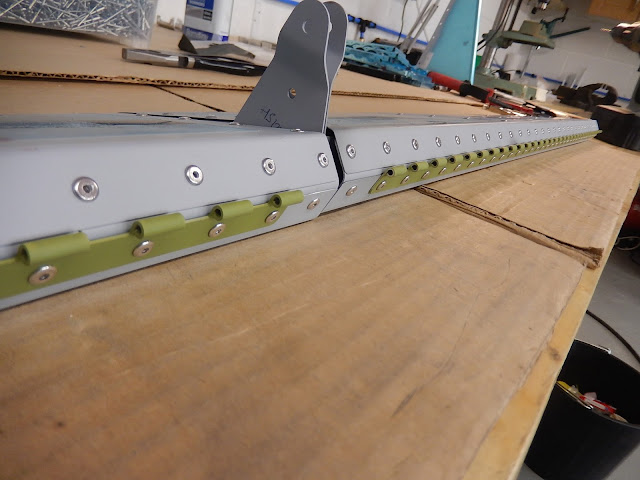 The hinges are still using the remains of my green primer in a can - easier than setting up the paint gun for just two small parts.  They were painted with a gash rod inserted through the hinge-pin hole to make sure it didn't get clogged up.
I also want to fit a Navigation antenna inside the top of the fin, so this means adding an antenna mounting plate and modifying the fin cap. 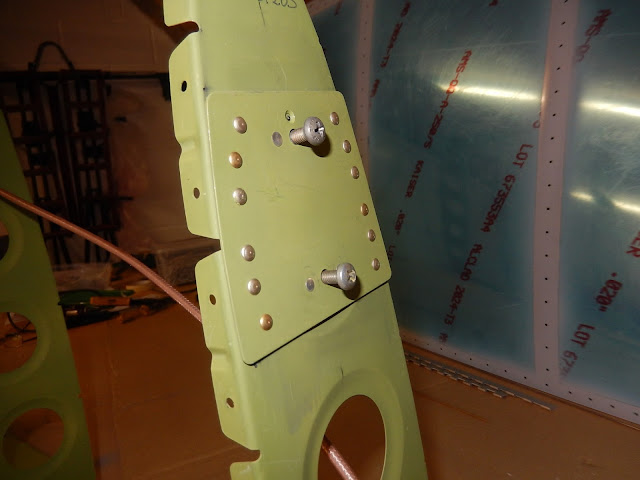 This is the doubler plate for the Nav antenna.  The antenna will fit above this plate using two 15mm high x 20mm diameter aluminium spacers.  Small holes in the fin cap will allow the antenna elements to be installed once the fin cap has been fitted.


Next part is to complete the fibreglass tips for the fin and rudder.  These come 'as removed' from the moulds. After a few hours of cutting sanding and drilling, it's time to see if the parts all go together and check if the rudder and fin caps interfere when the parts move on the bearings.  It looks like we finally have some real aeroplane parts! 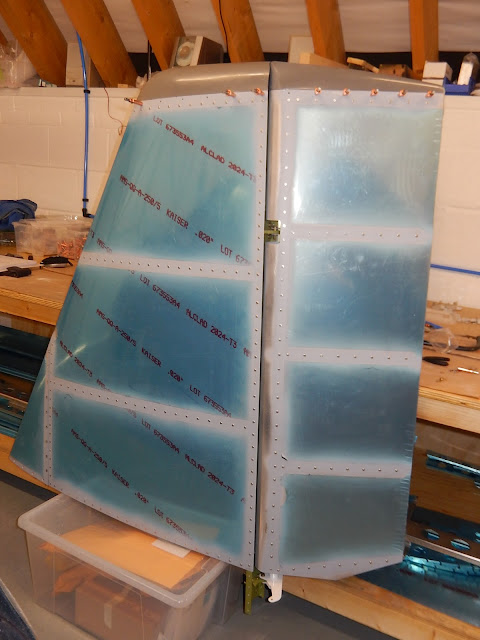 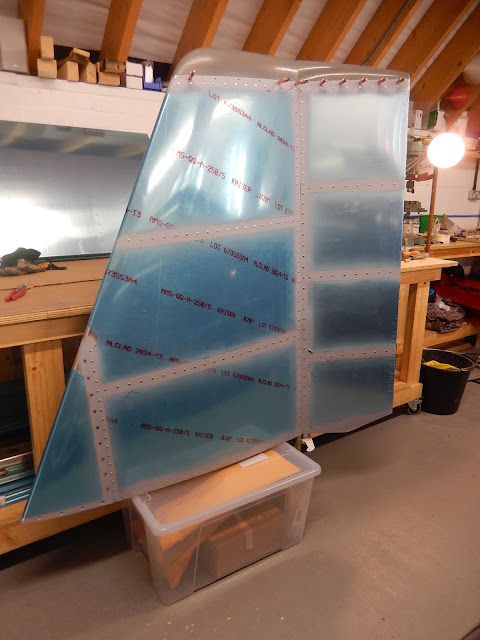 Real aeroplane pieces!
﻿
I've decided to change the type of primer I'm using again!  The original green primer in cans is not very efficient and will work out very expensive.  The later single-part Acid-etch grey primer really doesn't stick as well as I'd like.  I don't want to go through the pain of using Alumi-prep and Alodine, so all future parts will be aviation yellow epoxy primer which seems to be the toughest stuff available.  This does mean using a forced-air breathing mask as the two-pack primer is pretty nasty stuff.  Someone in the future is going to wonder what was going on with so many different colours inside hidden parts of the aircraft!
Prior to getting on with the new parts for the horizontal stabiliser, I've also improved the paint area by creating a large paint box with a mesh top so that the air from the paint gun doesn't blow small pieces around the room! 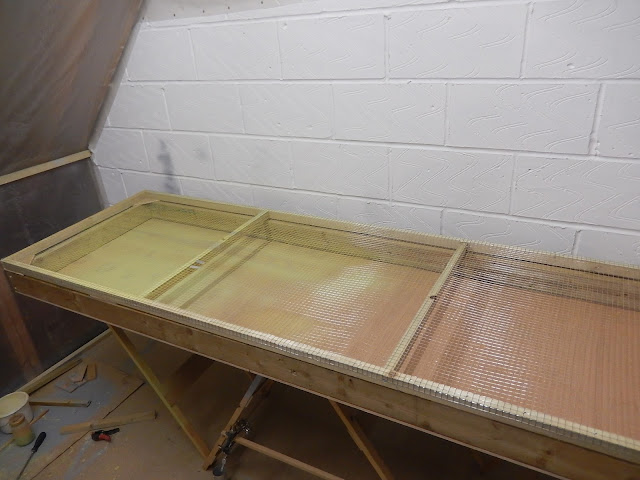 The paint box is 2.5M wide and 800mm deep and 150mm high with the meshed top on hinges, so should take the largest parts and allow bits to hang-down when opened.  You can see from the yellow mist that I've been experimenting and it does work much better than the paper-covered pasting table.
For the next week or two, I'll be working on the horizontal stabiliser skeleton (tail-plane in common-speak) and this also needs inspection prior to being skinned.