Since the inspection of the wing structure back in April, things have been a bit slow.  I have however managed to prepare all of the remaining parts - wing skins (just for the left wing), stall warn switch and landing light brackets etc.  I also built a mobile wing trestle to store the wings safely when not in work. 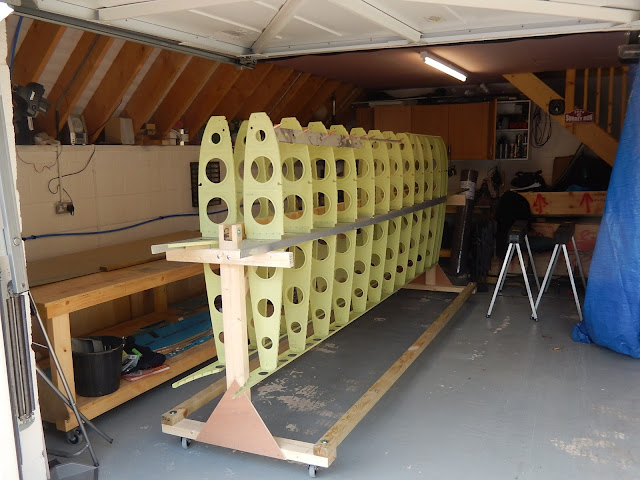 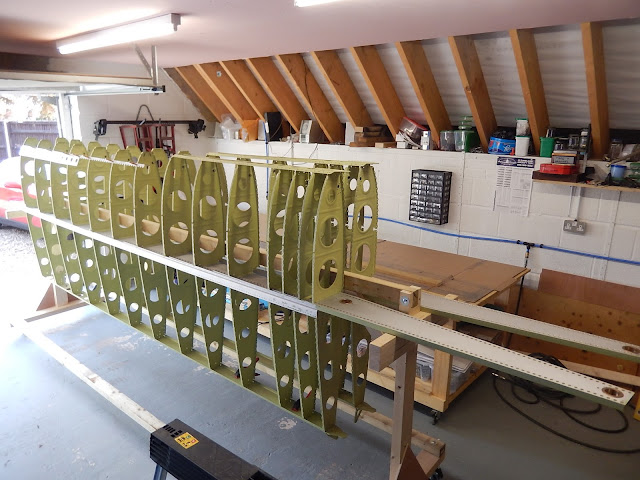 Wings on the mobile trestle. 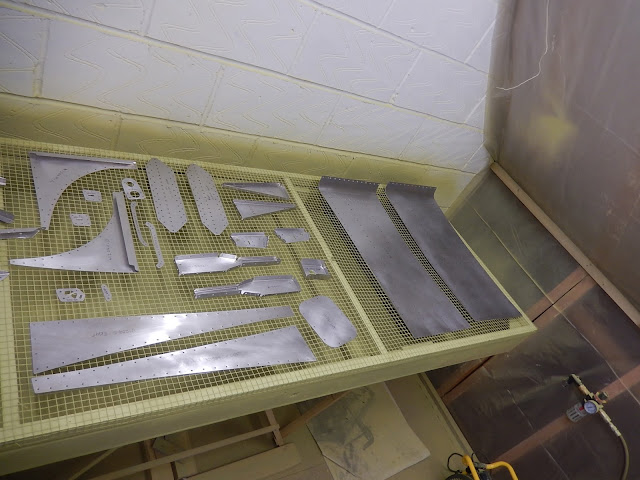 Some of the wing small parts being prepared and primed. The main skins had to be painted in the temporary paint shop (where my car normally lives!) as they're too big to get upstairs in the garage.
With all parts ready, it's now it's time to start assembling again. 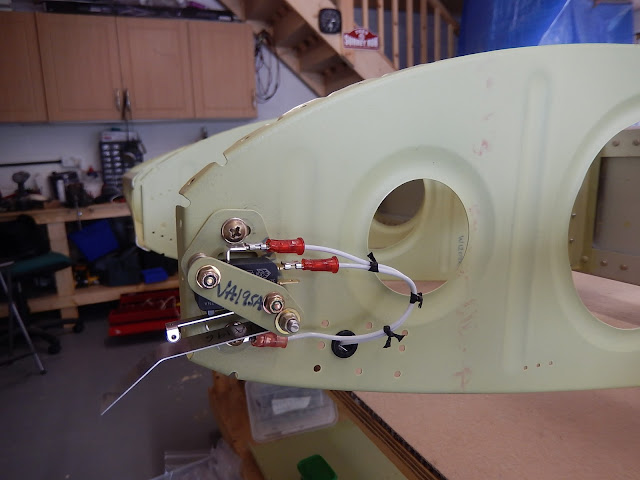 This is the stall warn switch on the left wing leading edge.
For the non-pilot readers:  Normally, airflow approaches from the front of the vane and pushes it down.  However, if the angle of attack is too high, airflow will come from below the vane and push it up, causing the micro-switch to close and sounding a horn to make me push the aircraft nose down, thereby hopefully preventing a stall.  Although it's been adjusted now according to the build manual, final adjustments may be required after flight testing if the activation speed isn't within limits..
Once the remaining wiring was installed through all of the ribs for the nav and strobe lights, the wing was turned over ready for the first bottom skin to be fitted. 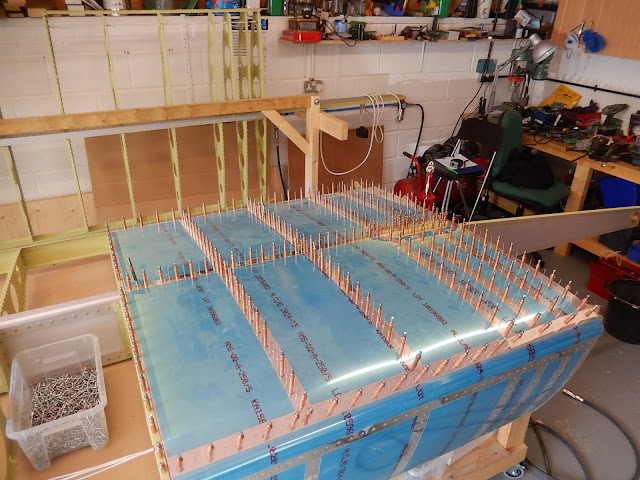 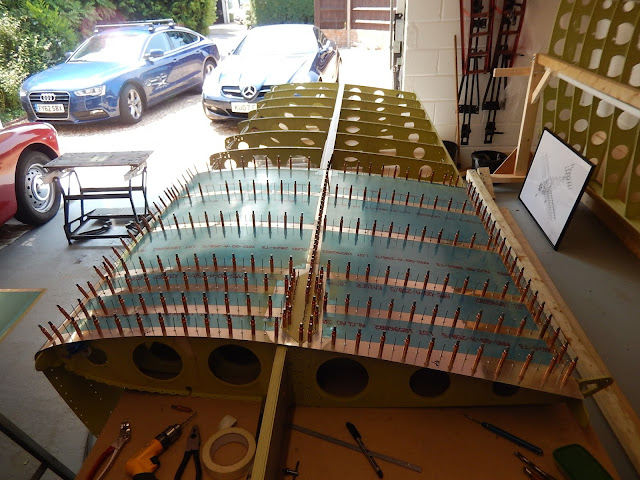 Here's the first skin in place with alternate rivets and clecos. 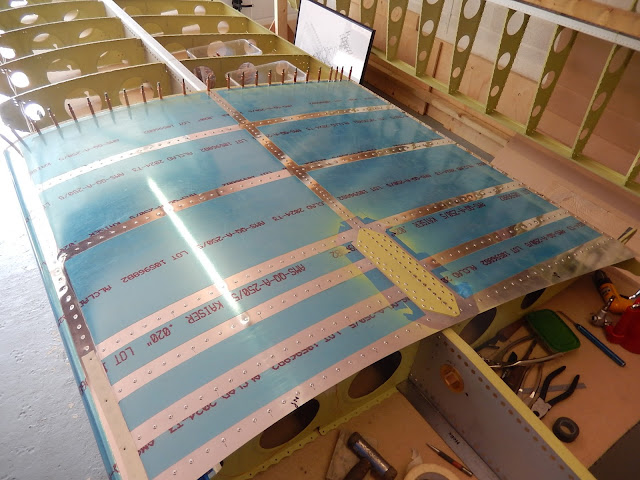 The first skin all riveted in place. 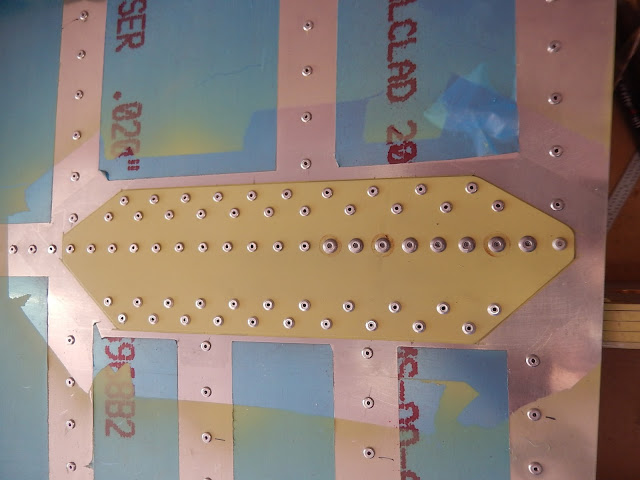 Close-up of the lower skin reinforcing plate - a modification that came about after the first aircraft went into service.  There are 62 rivets of 4 different types holding it in place! 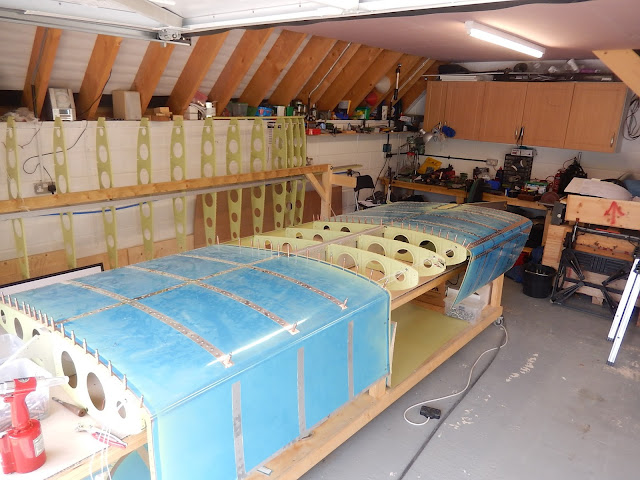 Outboard bottom skin now in place and the nav light wiring hanging out of the last rib.  The wing-tip will go where the rivet gun in standing and it's made of 3 more skins and some complex angles.    There's also some fibreglass work involved - yuk! 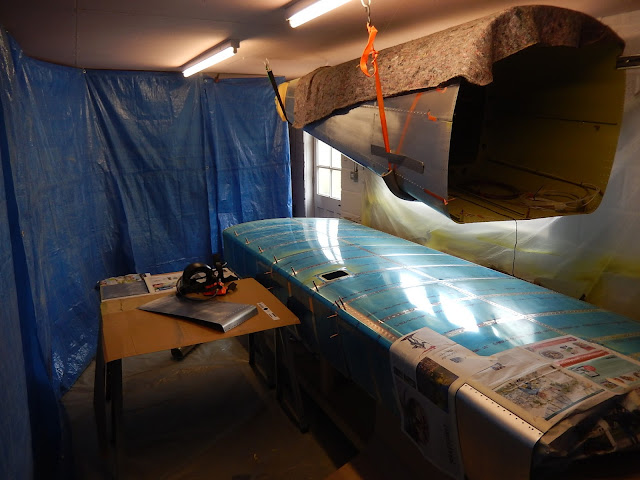 The final centre skin is now fixed in place with a view of the stall switch access panel.  The wing is now in the temporary paint shop so I can prime the section of the inboard skin where the wing-walk doubler will be installed - the piece on the trestles to the left.    It's not obvious but under the cardboard  is the top inboard skin which also requires a small section priming for the aft end of the wing-walk.  I should have dealt with these bits of painting earlier but they got overlooked.  I'll get in right on the other wing! 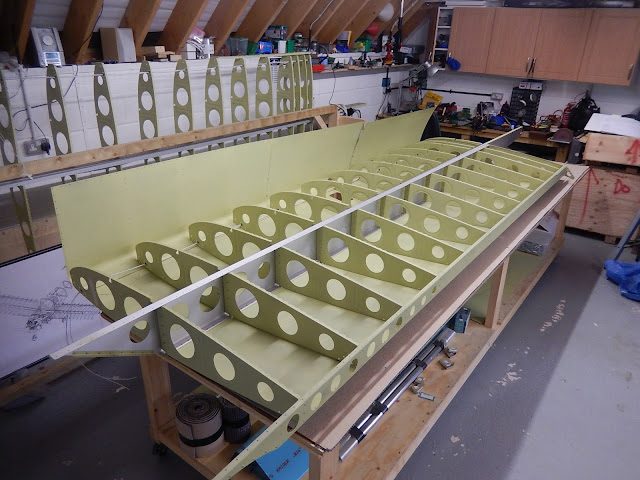 The left wing now back the right way up  and in the build area, ready to start rolling the leading edge into place. 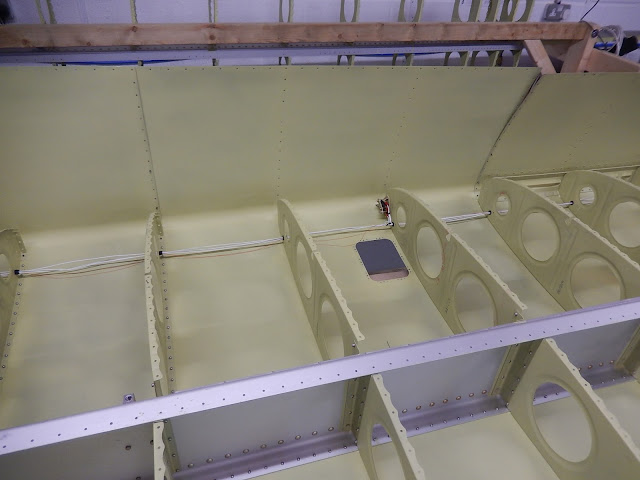 A view inside the centre skin bays showing the stall warn switch and its access plate.  Before I close this section I want to add an extra static pipe for a future angle-of-attack indicator.  This requires a static port rivet to be fitted on the wing bottom skin a few inches behind the leading edge. 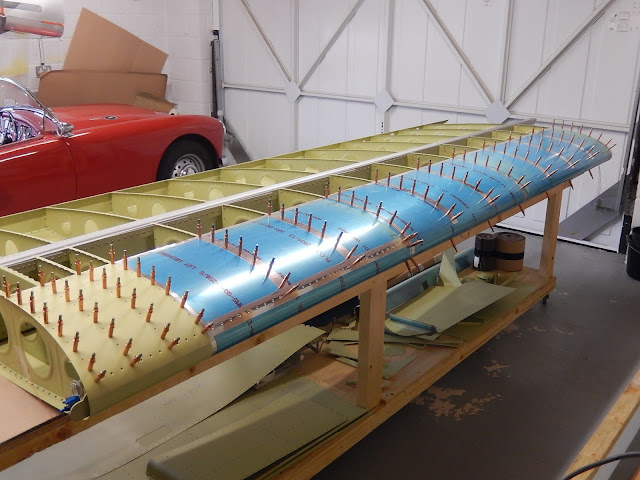 The 3 bottom skins all rolled and clipped around the ribs to form the wing leading edge.  This is quite awkward to get the holes all lined-up and not crease the skins.  In the foreground you can see the blue electrical connector which allows for quick removal of the wings.   The primed outside section of skin nearest to the camera is the bit I primed earlier prior to it having the wing-walk doubler fitted. I want all mating surfaces fully primed to prevent corrosion anywhere where moisture could get trapped. 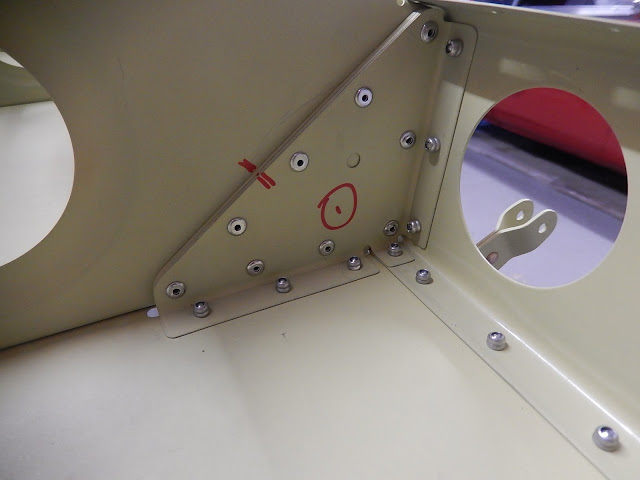 The last part to deal with before the wing top skins are fitted is to install the two outboard flaperon hinges.    You can perhaps imagine some of the language when trying to get the bottom corner rivet installed through the rib when the two going through the skin and rear spar were already fitted! 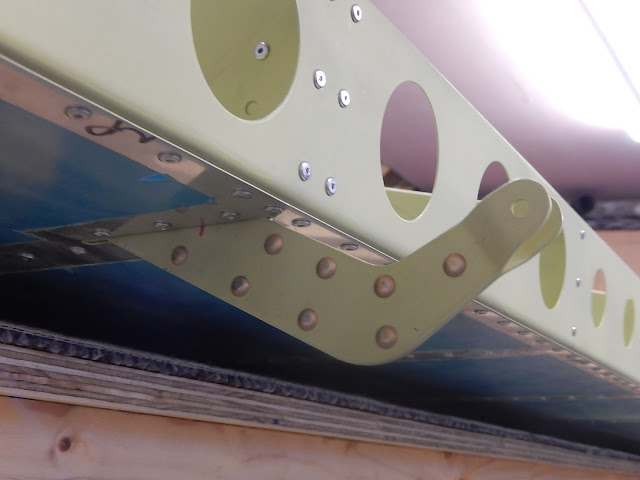 And finally, just to prove it doesn't always go to plan, here is where a rivet didn't quite go all the way through a rib-to-aft-spar tab .  I didn't find it until I flipped the wing after the bottom skins were fitted.  Fortunately a bit of careful drilling got it safely removed and replaced without any damage! 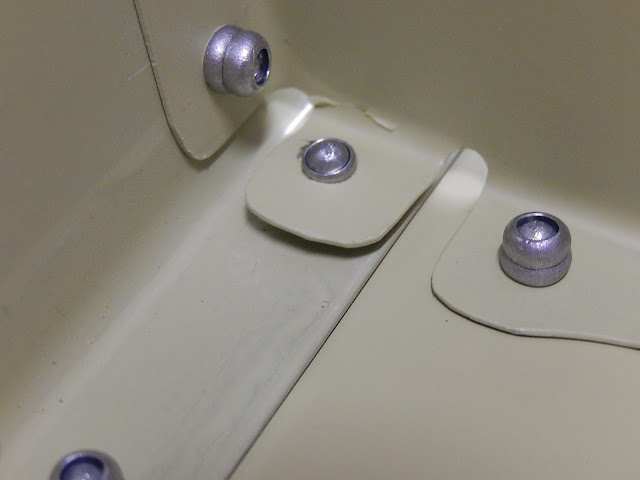 There will be a bit of a gap again now before I can get on with the top skins - paying work and a holiday take priority. Once back underway in mid July I think it'll be just a few days to complete this wing.
﻿
Posted by Harry'sRV at 14:15